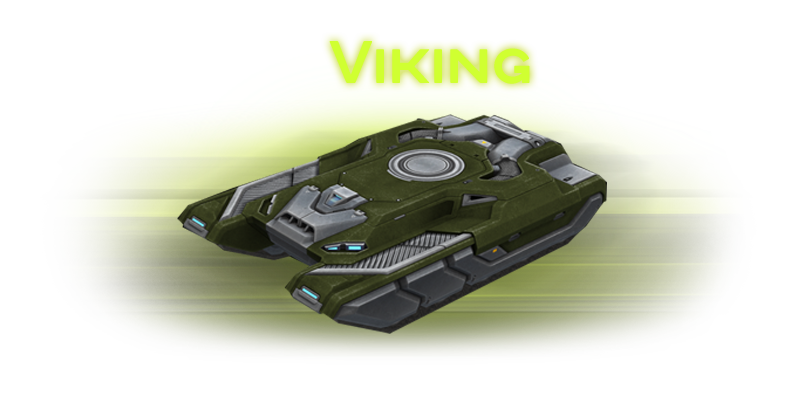 A heavier relative of Hunter, Viking is the second of the two universal hulls, a somewhat more popular variant of the medium selection. Being fairly inexpensive and quick to access (spare the Mk5 modification), Viking is a reliable asset of the average tanker's garage, and it pays for itself; almost impossible to flip thanks to its wide shape, low profile, high weight, and centered turret, this hull is the epitome of stability. It has the torque to shove around even some of the heavy hulls and the armor to brazenly charge into them, to boot. While it's not exactly built for racing Wasps, a smart Viking user can typically outlast them, using its high lateral acceleration to deftly duck around obstacles and tackle them when they attempt to enter and engage. It should be noted that a turret with medium or infinite range is preferable on this machine, as chasing after light hulls across giant maps isn't quite Viking's cup of tea.


This hull encompasses all of the latest military technologies combined in a single piece of engineering art. Enhanced armor and second-generation tracks system make this hull an outstanding universal tank. The hull can be used for any type of battle missions -- from a strategic defense to a full-frontal assault. Named after the legendary warriors of the North, “Viking” is the most fearsome after overdrive activation. Supercharged weapon system will greatly increase the firing speed of any turret installed on the hull, swiping enemies off the battle with incredible ease. The best use of its superpower is to launch a surprise attack, since firing on all cylinders Viking quickly becomes the primary target for enemy snipers. That’s fair, considering true warriors always face death heads on.

Retrieved from "https://en.tankiwiki.com/index.php?title=Viking&oldid=31721"
Report a problem