Difference between revisions of "Mammoth" 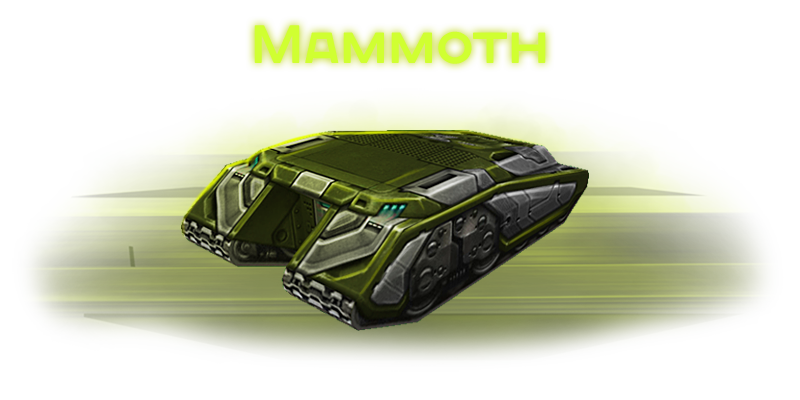 "That Vulcan over there won't stop tickling me." Passive combat is nothing for a Mammoth, a hull known for keeping players nervous whenever one is nearby. These giants are well known to both snipe targets from a distance with Shaft and duke it out up close and personal in Polygon CPs everywhere, but it's unlikely you'll find one using a proximity-based weapon on anything larger than the aforementioned map. The last of the three hulls with an off-center turret placement, Mammoth too can peek around corners and blast away at targets, but it'll never have to worry about being flipped or even shoved for readily apparent reasons: its weight, pushing power, and sheer size are the highest in the game. The only true deficit of this hull is its speed, which is mind-gratingly slow even with Speed Boost active.

Heavy hull. Maximum mass and stability. Mammoth's overdrive boosts its speed and gives it a deadly touch that kills any enemy that comes in contact with it.


A moving fortress on tracks. Flagman among the heavy hulls. Solid piece of heavy, enforced by concrete armor, with slow speed, but capable of surviving under the fire of several enemy turrets at once. Even considering its impressive thickness, defense is not the only function of this hull. Special AT-field, activated by overdrive, will allow this beast to drive through mines and protective barriers while brushing off enemy fire of any intensity with ease and no visible consequences to its armor. It is literally unstoppable, even if you block the road with tanks, they will become an extra layer of metal on Mammoth’s tracks.

Retrieved from "https://en.tankiwiki.com/index.php?title=Mammoth&oldid=34391"
Report a problem