Difference between revisions of "Hornet guide" 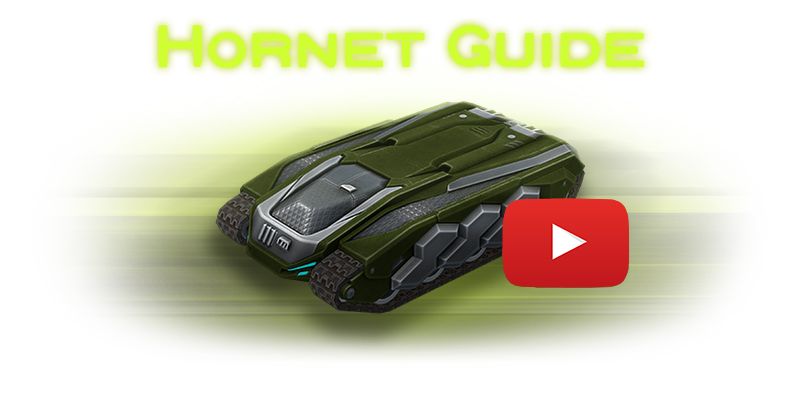 Hornet was officially released April 24th, 2010. As soon as it was released, it became the fastest tank available for purchase, at 10.00 speed. Far faster than its predecessor, Wasp, which had previously been the "speedy tank." Interestingly enough, three days later Mammoth would be released, which became the most healthy tank that was available at that time, with 200 health. To the dismay of many tankers, Hornet's top speed was decreased by .9 with the rebalance on December 17, 2012. Now it only has 9.1 m/sec. However, its health was increased. The speediest tank then became Wasp, with a whopping 10.8 m/sec at top speed.

This is a bit hard to get initially, but don't worry - once you get it, it's a hard thing to forget. When trying to get off a high area in a hurry, try jumping off while turning. It may take a few times to master, but that is easily done by creating a private Silence match. Jump off the high ledge on blue team, and you'll be sure to get this trick down. It's very handy in many situations, especially when trying to get the enemy flag, or going for crystal boxes (as shown above). You really won't need this if you use recoiling weapons like Smoky or Thunder, but with Firebird, Isida, and Freeze this trick is invaluable.

Since hornet is very small it can fit into places that other tanks can't. However, sometimes you have to drive slightly to the left so that your tank can get up enough to fit through the tight space, as shown above. Don't try shooting if you have Thunder, since it isn't necessary. If it makes it easier on you though, you still can do it with weapons that don't have splash damage like Thunder.

2. Defending is definitely not your job. The only exception to this is when you are using Isida, and in that case you can stay in the base a little if the defenders need some support.

3. Getting a little fancy is always nice, but with Hornet one tiny mistake can be deadly. Make sure you know how to effectively preform all the tricks before trying them in actual battle.

Firstly Hornet, a second tier hull, Hornet is the second of the two light hulls, Wasp being the first. Similarly Hornet is a fast hull but without completely trading off all of its armor. Hornet's overdrive is generally great everywhere and allows players to see locations of all enemies on the battle field, this is extremely useful when planning an attack into heavily defended territories in modes such as in Team Juggernaut and Capture the Flag. Additionally, your tank ignores all of your enemy's defences such as supplies and protection modules, dealing them full damage. This can be used in one of two ways, a player can do defensive and still deal consistent damage with turrets such as railgun and possible Defender drone, or a player can use booster drone to snag themselves a couple kills in quick succession before the duration runs out. That being said hornet is best used with turrets that can stay a decent distance from their enemies while dealing consistenly good damage this could include turrets such as: Railgun,Shaft and Gauss.

2. Try to stick with CTF matches, since there you have the most importance, unlike in other game modes.

Selecting a hull is a massive choice - it will affect your entire career in Tanki. Hornet is not one of the tanks that satisfies everyone - and it is never a good idea to just pick it up and run. It takes a lot of time and skill to master it fully, and even for masters there are new things to learn. Hornet opens up new game-play possibilities because of its speed. The speed usually makes beginning Railgun users foolish. Adjusting to Hornet's lack of stability can be very hard for Viking and Mammoth users. I do not recommend suddenly changing your main hull to Hornet, especially if your main hull is a stable tank. However, former Wasp users sometimes change to Hornet if they dislike how hard Wasp is to manage.

Another thing to consider when you are choosing your tank is your weapon. Shaft and Hornet, though effective pre-rebalance, is not quite as effective now. One last thing before we move on - if you love Hornet, but you can't seem to win battles with it, never fear. Practice, practice and practice some more. Eventually, you could become one of the most pro Tanki players around.

Retrieved from "https://en.tankiwiki.com/index.php?title=Hornet_guide&oldid=24952"
Category:
REQUEST TO CUSTOMER SERVICE
We have recieved your request for our services and we will get in touch with you shortly.
Report a problem