Guide to playing in Wolfenstein effectively 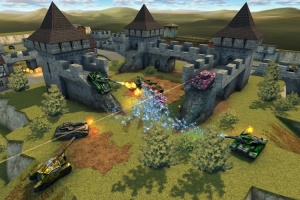 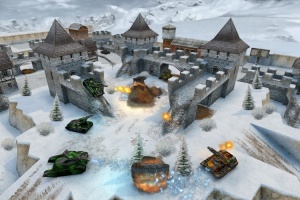 Overview: Wolfenstein is a map that occasionally gets its time to shine; don't rely on that too much, as the map isn't popular, by any means. When the map does appear in the battle list, though, it's not long before other players take interest and slowly begin to fill the arena. A fairly interesting map for players that grow tired of constant Silences, Polygons and Noises.

This spire-ridden map, barring a couple of lengthy pathways, is rather cramped, with many buildings clustered around the same spot and small pathways branching off to other segments of the stage. Logically, in areas with high building and polygon density, weapons like Firebird, Striker - which can actually do really well at the raised platforms near either the base - and Twins can fare reasonably well, only facing real trouble when caught unawares by the likes of Shaft and Railgun upon setting foot into their territory. The map can be divided into recognizable partitions for various weapon types, with longer-ranged turrets having the edge on Hammers and Freezes around many of the straightaway locations within the bastion and without. As the inverse is true: the same close combatants are nigh untouchable within the haven of building clusters and other various fortifications, easily dispatching long-ranged fighters that dare set tread around their haunts.

Thunder and Ricochet, less accustomed to large maps than their infinitely ranged brothers, have just as much of an opportunity for first place as they thanks to their ability to deal damage without aiming directly at their opponents. A Hunter or Hornet would serve these two well, to counterbalance the larger size of the map by covering a comparable percentage of ground as they would in a truly mid-sized battlefield. While this may sacrifice more ground, this will allow them to escape predators and retaliate without moving into their direct line of fire. As a matter of fact, almost any hull bar Mammoth or Wasp would be perfect here, the outliers either being too slow or having too little armor to be as effective as they would normally. This is debatable, however, depending on your own skill level and where you spawn.

Bulk is not just a recommendation, but a necessity. As previously mentioned, the map is a mixed basket, varying from clear stretches to crowded metropolises. Without bulk around long pathways, you're likely to be riddled with rounds before you could type "plz help", while not having enough armor around the alleyways will more likely than not result in your tank being barbecued beyond recognition. In many cases, Viking and Hunter are excellent choices due to their well-recognized amalgamation of exemplary health and relatively decent speed.

All is not completely lost with the light hulls, however, as their speed is still reliable in avoiding detection, so long as their drivers know how to do so. If you're traveling through the buildings, keep your camera angled high and your turns as accurate as possible. Players don't tend to try and kill what they don't know is there, so use that camera angling to your advantage to avoid detection by the Hammers and Twins dwelling there. Once you have possession of the flag, make a break for the middle of the stage, pass the flag to someone with high armor, and proceed to bodyguard them until they return to your alliance's base. Chances are you'll have received some fresh scratches on your war machine after diving turret-first into the enemy base, so passing to someone with more health would be the wisest decision you could make as a team player. (Remember 'F' is the key that drops the flag.)

There are five control points in this map, so it's worth being able to move around swiftly and accurately. However, the flip side to being the fastest machine on the field is also being the weakest machine on the field, usually unable to stand on the point bravely as some monstrous Viking-Thunder/Striker charges at them. Therefore, hulls such as Hunter and the aforementioned Viking are the most reliable, although, if the speed really compliments your playstyle, Hornet is also an option, having a far better speed and only somewhat neglected health statistics.

On the subject of weapons, there isn't really anything that simply doesn't work, considering the diversity of the stage allowing for weapons to function differently depending on where you are. Shafts and Vulcans can tear up the field outside of the Wolfenstein fortress, while Twins, Ricochet, Magnum and Smoky have little trouble on the inside. Firebird and Freeze are always successful at tackling large swathes of foes at once, which is quite handy when multiple opponents gather to try and take a point quickly.