Guide to playing in Solikamsk effectively 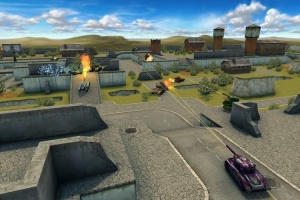 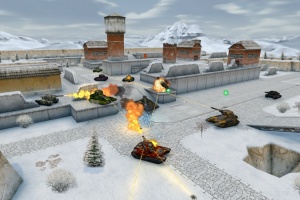 Overview: Solikamsk is a map almost impossible to look for. It has a niche role in parkour, but really and truly, it doesn't really do that well. There's nothing about it that excites and entices, hence its lack of popularity. Battle Modes: DM, TDM, CTF, CP
Size: 24 players, 12 vs 12

For a large map, shorter ranged turrets such as Firebird and Freeze should normally be out of the question, but that isn't the case here - reason being is that, barring the middle of the map, which you'll be looking to avoid, a lot of the map is cramped and narrow, which is where shorter ranged turrets excel. As such, it gives said turrets some utility. When crossing the middle in pursuit of an enemy, you'll want to be on alert, the elevated enemies will light up when they see you, and it opens you up to fire from many angles. Assuming you're light (Hornet or Wasp), you won't be there long, but it's always something to watch out for. Along the lines of weapons, just about anything goes, but as for any mid-sized map, be sure to pack some mid-ranged modules like Grizzly and Kodiak.

Light hulls have a role in being an offensive presence, and the fact that not many people know their way around the map can be used to your advantage. Perhaps opt for an inconspicuous route; this means certain enemies will not know where you are before it's too late, due to the lack of knowledge. It's a psychological thing, possibly lacking effect against experienced foes, but it's one that has the potential to work. It's almost a value judgement you're going to have to make. Do your enemies know what they're doing? Heavier hulls take up their usual roles in being a defensive wall, since the bases are closed in with ample cover.

There are three control points, but the significance here is that they're all located in the middle of the map, on the same single road, with very little distance apart, which makes for an admittedly interesting dynamic. Longer ranged turrets such as Railgun have a niche role in picking off enemies pursuing the points, but other than that, you're going to need bulk, such as Viking and Dictator, accompanied by immediate power, such as Firebird or Hammer This is the sort of situation where every teammate needs to be doing something of sound quality, otherwise the numbers game will get at you.