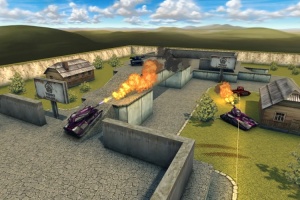 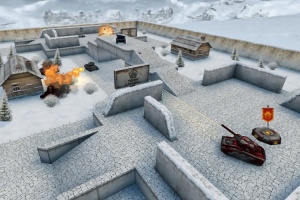 Overview: Short Bridge is a map that isn't impossible to find, but simultaneously isn't one you can reliably look for. As the name implies, it's not a large map, by any means.

Closed ranged turrets excel in this map, mainly because there's nowhere for players to run from them! In a lot of maps, closer ranged turrets find their niche by sticking around in the cramped quarters, such as between buildings and down short alleys, relying on the walls to provide cover from ranged artillery. However, with the advent of Short Bridge, everything is compact and confined to a small space, meaning proximity guns have utter free reign across the map. Turrets such as Firebird, Hammer, Freeze will have little trouble in finding prey, whereas Shaft and Railgun have nearly nowhere to hide and nowhere to use themselves properly, rendering them borderline extinct.

Bearing in mind that there's almost nowhere to run to, heavier hulls can thrive. Short bridge is very cramped in all spots, meaning you can sport a Titan or Mammoth yet still prove effective in the battlefield. However, hulls such as Viking and Hunter shouldn't be discredited; the extra speed can situationally help in a pinch, say, if you were being hounded by a Mammoth / Twins and needed to make a temporary getaway to recharge your turret. The shelter of the bridge itself, be it the supports as visual cover or actually climbing onto it, are your only friends in that they protect you for a limited time from all the short ranged fighters, but at the same time are fickle in that they can and will hide your enemies as well. The planar surfaces of the bridge also mean that Ricochet becomes more viable, hitting targets on the other side of the supports.

Light hulls have little-to-no role in capturing flags here, as the map is particularly small, meaning it's highly unlikely an attacker will have a clear, unmanned path for escape since there are so few paths available. Therefore, hulls such as Wasp and Hornet should be completely avoided. Conversely, hulls such as Titan and Mammoth can make for bulky defenders and potentially mid-fielders, depending on the weaponry used, whilst Dictator, Hunter and Viking can make for suitable attackers; all of these should be coupled with a closer ranged turret, anything from Isida to Smoky.

You will be able to cover a lot of the flag bases with Firebird and Freeze, for example, whist the mid-fielding community can be left to Thunder and Ricochet, of which the second affects can significantly boost their potency as supporters. Mines are also a critical tool to your team's success, but admittedly, staying alive for very long in a Short bridge map is a Herculean-class feat, since even the furthest spawn point can still launch Twins and Ricochet bullets and impact with decent damage. An Isida on the team to support minefield constructors and offensive measures is required for peak performance.

There's only one control point in this map, meaning that if you're not going in heavy, there's no point going in at all. Titan and Mammoth are the optimal hulls for this gamemode, as no matter where you respawn, very little distance is needed to reach the control point. Couple this with a hard hitting turret, since, undoubtedly, you'll be on the offensive throughout the entire match. Knowing how to time and coordinate your supply usage may be the difference between holding and losing a point, so be sure to memorize your smart cooldown times. Other than these few points, CP mode plays out as it usually does -- spawn, charge, kill, die, repeat. It's a wonderful life.