Guide to playing in Osa effectively 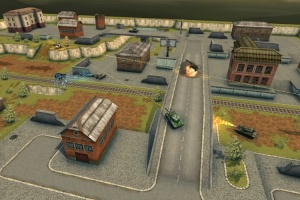 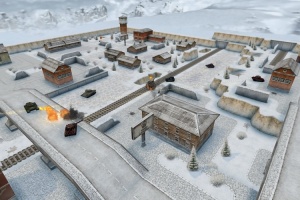 Overview: Osa isn’t a very popular map. You'd be very lucky to see an active battle at any rank. It is quite popular for parkour as it contains many hard-to-conquer buildings.
Battle Modes: DM, TDM, CTF, CP
Size: 20 players, 10 vs 10

Osa is quite a large map. There are many different spots that suit different combos. No turret or hull majorly stands out in every position but there are a few that are very strong in certain parts of the map.

Both bases in Osa are open to many different paths of attack. You will need to have more than one person in defence. A short-medium ranged turret and heavy hull and an Isida with a medium hull will generally do the trick. This will help you stay alive in strong attacks. Don’t forget to place mines as well. Just don’t overdo it as one death will destroy all those precious mines. As for attacking, you will want to take the path that has the best cover to get to the flag, but the quickest path back to the base. It’s recommended that you use Hornet or Wasp as the other 3 hulls just don’t quite have the speed needed to get in and out with the flag and outrun the other team if needed. Any turret can perform well; it just depends on what you are comfortable with and what you are trying to do. For example, Firebird and Hammer are great for clearing the area around the flag, Ricochet is good for attacking from behind cover and Freeze is best for slowing down the defence to prevent them from being able to catch the flag carrier.

Hornet or Wasp is great for getting to those control points that are closer to the enemy base. When partnered with a powerful turret, such as Firebird or Hammer, you become both fast and extremely deadly. Viking is good for hunting down points that are in open spaces as it can take a few hits as well as being basically impossible to flip. Viking is best mounted with a medium turret like Smoky or Ricochet as it can help out attackers while still being covered. Long range turrets can be used to attack enemies from the safety of your base as well. These are best on heavy or medium hulls.