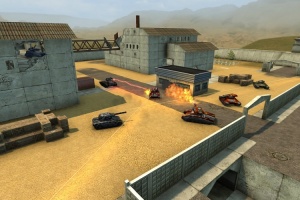 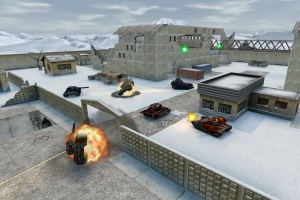 Overview: Industrial Zone, while not the most popular map out there, is still fairly attractive to players in the mid- to lower-ranks. Not only does this map have a wide range of tactics employable due to the many terrain variants, but there are also many parkour opportunities. The top of the hangars around the lookout towers are the first to come to mind.
Battle Modes: DM, TDM, CTF, CP
Size: 20 players, 10 vs 10

Almost every weapon has an opportunity to shine in a diverse map such as Industrial Zone. Starting with the close ranged weapons, there are many pockets of tight and confined spaces near the corners of the map for them to hide, taking every opportunity to pounce on any sorry soul who dares enter that territory. Note that camera angle adjustment is difficult in these areas, especially near the large series of hangars by the red flag's zone.
Mid-field weapons, such as Striker, Smoky, Hammer, Thunder, and Ricochet all tend to excel within the confines of buildings and passageways. While Smoky has the impact force and critical hit to its benefit, Thunder can use splash damage to take out tankers from behind blind corners, giving them significant advantages over other tankers. Ricochet can pull this strategy off with even more finesse, considering that combat from unusual angles is what this turret was designed to excel at. Hammer can effectively be used to brace it's impact on enemy tanks, using its pellets to knock off enemies' aim. Striker works well in this map locking down enemies on far sides of the map or destroying them in mid-range combat.
Lastly, the rest of the map goes to long ranged fighters. Shafts, Magnums, Railguns and Vulcans alike simply love the firing ranges near the center of the map and the sides. The lookout towers on the tow red corners are especially lucrative to these players. A few crafty tankers can even set themselves to control the bridge overseeing the rest of the facility, picking off players that dare to hide within the walls as well as outside. A heavier hull is recommended in this situation, though, since you're leaving yourself open to attack as well.

Light hulls are useful for swift flag captures, as per usual with maps with moderate size. It's worth noting that since Industrial Zone has so many diverse sections that mid-fielding can be rather important too, since in CTFs, players will be forced to stray outside their comfort zones; a few mid-field weapons in tandem with a Viking or Hunter would suit this position well.
One thing to note is that whilst the map is quite large, in comparison to others, there aren't as many players to co-exist with you here, with Industrial Zone only having a 20 player capacity. This can be taken advantage of, since teams have more difficulty setting up a proper offense with many members at their base, making for a quicker swipe of the flag. However, having a low total team member count doesn't mean you can't use closer ranged turrets to take advantage of the cramped quarters (i.e. the underground tunnel, or inside the buildings), such as Firebird, Hammer and Freeze to be a true offensive presence.
The aforementioned vantage points from the towers pair well with Railgun, Magnum and Vulcan, dependent on which one you claim. For Railgun, the tower further from the flag that harbors a Double Supply drop is the best route to take, since you can slowly but surely peck off any unwanted visitors from behind the cover of a large concrete block. Meanwhile, the lookout tower right next to the flag is a great place for a Vulcan to hold position at, having both a constant rate of fire pointed at opposition that may attempt to take the flag and an extra life nearby in case your constant hull exposure lets the situation grow sour fast. Magnum gives you the possibility of hitting the opponents' base without having the need to move away from cover.

There are five control points in this one map; taking the size of the map into account, it's not a huge leap to assume a couple of points will be neglected. You can use a lighter hull to quickly capture the neglected control points, which can make a difference in the long run, or alternatively, you can use a medium/heavy hull to seize control of the more popular control points.
It's worth noting, though, that the heavier of a hull you decide to use, the less likely you are to be moving from point to point with any swiftness. If you're intent on camping at a specific, well sheltered point, then something like Ricochet, Hammer or Thunder would suit you well, considering they can take maximum advantage of the surrounding environment. Twins is also a niche option for suppressing fire near contained or precarious driving locations, a great choice for bowling roving Wasps off of cliffs like there's no tomorrow.

For "Close to Mid" range Combat

For "Mid to Long" range Combat