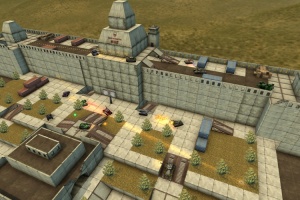 Overview: Esplanade is a relatively versatile map. It is a medium to large map, and is very dynamic, meaning that it can be played with pretty much any hull and turret combo and playing style. It’s most common as a CTF, but is not played very often.

In Esplanade TDM, you basically want to have the same tactics as in DM, just with more campers, less mines and a few Isida. Having an Isida or two handy is very helpful so that your team is able to replenish its troops on the battlefield. In this mode of play, it is recommended using medium hulls and long or medium range turrets, with only a few faster tanks with Freeze to distract and slow the enemy tanks for the more dangerous, high damage tanks to take them out. Don’t forget the Isidas!


The other thing that you can do is have a Freeze and Hornet or Viking hanging out around the flag so any tankers trying to get past will find it even harder to get away.

Basically for this game mode on this map, you want to get the three control points up the top. Once you have gotten these three points, all you need to do is hold them, and you will win. To capture these three points, you will need to storm the top and block off the spiral tunnel. While storming, have a well-balanced team. This means you will need a mix of short, medium and long range turrets with light, medium and heavy hulls. Once you have captured the top, the best way to block them off is have 2 titans side by side with an Isida behind.