Guide to playing in Chernobyl effectively 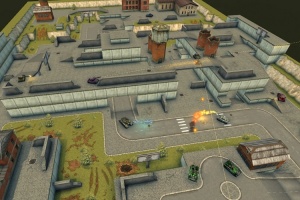 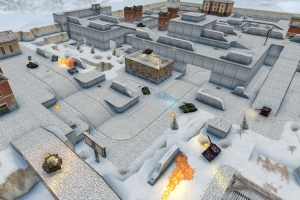 Overview: Chernobyl is a medium to large sized map, which serves its name by providing a large power station themed building in the centre of the map, along with several chimneys. This map is scarcely seen at high ranks, although it is often possible to find the odd Chernobyl DM or CTF at lower ranks.

In Deathmatch and Team Deathmatch, the design and layout of Chernobyl is well suited to camping and picking off enemies. There are three main areas in which camping is advantageous. This applies mainly to Deathmatch gameplay, but can also be effective in Team Deathmatch depending on your team’s positioning.

The first two areas are the spawn areas at each end of the map. These areas are based on higher ground, providing a vantage point, as well as access to multiple supply drop zones. Remaining in these areas will often provide you with sightings of enemies as they respawn, which gives you a significant advantage in Deathmatch. In this case, mid ranged turrets such as Smoky and Ricochet can be effective in picking off enemies at range, while also being able to defend against close range assault from spawning enemies. A medium hull is also recommended here.

The other camping area in Chernobyl is probably the most obvious, and the most contested area in the entire map. The main structure in the centre of the map has an accessible roof area, which allows views of the entire map, including the spawn areas of your enemy. In Team Deathmatch especially, reaching this area allows you to snipe your enemies as they spawn, preventing them from reaching the building and taking over. Longer range turrets such as Railgun and Thunder along with Hornet or Viking can be useful in speeding up to the top of this area, and then firing down on enemies.

Due to the obvious strategic importance of this area, there is a ramp on both sides of the structure, meaning that both teams in TDM have equal access from their spawn areas. This means that a lighter hull can be useful in racing to the top at the beginning of the match to secure the area before your opponents do. The final benefit of this area is the abundance of supply drop zones which allow you to make the most of the vantage point. There is even access to repair kits near the top of both ramps, which provides for interesting defence gameplay.

When it comes to defence, both the red and blue team’s sides are fairly similar in structure. A few buildings and walls around the flags provide cover for defenders, and the higher ground is useful for sighting enemies and defending as they approach the ramps.

Medium or heavy hulls such as Dictator and Titan can be used to hold off attack, although short range turrets aren’t recommended for defence due to the likeliness of ranged attacks, which will leave defenders helpless. Medium to long range turrets such as Ricochet or even Railgun can be used to defend, and snipe enemies.

If possible, there should also be some defending players who move forward and try to hold the middle ground, in particular the area on top of the centre structure. As discussed before, this area allows players a clear view of the enemy spawn, and so this area must be contested at all times, in order to stop it being taken over. For example, a Hornet/Railgun using Double Damage from this vantage point can have a devastating effect on the enemy team, often killing players as they spawn. This is the reason that defenders should decide against short ranged turrets, which would be useless against such a sniper.

Attacking in Chernobyl has two main components. Firstly, a couple of players should be pushing to hold the area on top of the centre building, which will allow them to fire down upon the enemy spawn areas and keep them distracted. As mentioned previously, Railgun and Thunder along with use of supplies is highly effective.

However, sitting high up and sniping isn’t going to get your team any flags. A group of attackers should be taking lights hulls such as Hornet and Wasp with short to mid ranged turrets, and traversing the tunnels and roads leading underneath and around the sides of the building. These areas provide cover right up until you emerge at the base of the enemy flag area, and this paired with your teammates firing down from above should allow you to snatch the flag. Returning through the same tunnels should provide you with some cover, and once you have emerged back on your team’s side of the map, you will often be home safe. The only route which isn’t recommended is the channel which goes directly through the centre of the main building. Although it may appear to be a quick route from your spawn to the enemy flag, it is very exposed, and defenders will easily be able to destroy you before you reach the ramps up to their spawn.

In Chernobyl, there are seven control points. Two of these will usually go one to each team, while the remaining five are located in the middle of the map, and this is where most of the combat will take place. Point G will usually go straight to the red team, with point F going to the blue team. Points A and C are positioned in the middle, on top of the building. Points B, D and E are positioned in the middle, at ground level. As is often the case with CP, medium to heavy hulls are recommended along with the use of supplies to take points and defend against retaliation. At the beginning of the match, a good tactic is to go for the points B, D and E underneath the building. In many cases, the enemy will decide to rush the points on the rooftop, however there are only two points up there, with three points below. In this situation, a lighter hull may be preferable to allow you to rush to the points before the enemy arrives.