Guide to playing in Camp effectively

Overview: Camp is a very old map that’s been in the game for over six years. It is a small to medium range map where camping tactics can be crucial for defence. It is rarely seen in game but it does offer great gameplay. Camp is also commonly used for Save the Golds.

The way to win a Deathmatch in Camp is to use a medium to heavy hull and take cover. You will need a quick reload weapon with decent damage and range, like Smoky, Vulcan, Ricochet or Thunder with Mammoth, Titan, Dictator or Viking underneath.


The best place to camp would be:
On both the Red Side and the Blue Side

You will need to use a few mines, just so those pesky close range weapons don’t get too close. In that case, just lay them around the opening to your area.


As for other supplies, use a Double Armor while trying to get to an open place. After that, get set up by continuing to use Armor while laying a few mines around.
Once you have set up nicely and are feeling comfortable, lay a brick on the 2 key (Double Damage) and wipe out anyone that you can see.

Deathmatch in Camp is similar to any other map .The best way to finish top in a Deathmatch in Camp would be to keep moving around. Moving targets are much harder to hit, especially at close range, so this will probably be your best bet at staying alive. The best turrets for this tactic are Firebird, Freeze, Hammer, Twins and Ricochet mounted on top of either a Hornet, Hunter or Viking. You’re best way to stay alive would be to use the outside and just drive around shooting at enemies. When reloading, take cover behind a fence or house to try and prevent taking too much damage.

TDM is very similar to DM, except you have teams. You will follow pretty much the same tactics, except you need to balance out your team. 2-4 attackers, 1-2 midfielder (generally the Isida) and 1-2 campers. The 2-4 attackers' job is to kill the other team's’ front like before they can die. Attacking together is the best way to do it as double the damage and double the health, and that’s before you start equipping supplies. The Isida should (obviously) heal teammates as well as help finish off other enemies. Another useful turret in this map is Magnum. It can easily sit behind a wall and bombard the enemy base with lethal shots. Considering this map already offers great protection, this shouldn't be a problem at all. Likewise, Striker can also be a ruthless camping attacker if hiding behind the right walls and fully utilising its splash damage. 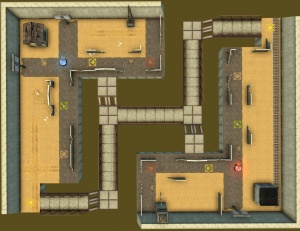 The trick to capturing flags in Camp is the use of the bridges that connect the two bases. The optimal defensive positions should include a Vulcan, Smoky / Thunder, and a pocket Isida for when enemies begin whittling away at their defenses. Heavy or medium hulls are recommended, depending on who wants to try mid-fielding as well. (Smoky is an excellent applicant for this position.) Taking a vantage point by the base walls is great for taking down players before they become a problem on the front lines; Railgun and Shaft have niche roles here, chipping away points and rendering assailants weaker before they reach the flag, making the final line of defense's job worlds easier. Likewise, a Striker or Magnum can weaken incoming attackers or attackers departing with the flag, as well as their support troops. They can both cripple a huddled-up defence with ease in order to support their attackers from afar.

For offensive measures, Striker, Hammer, Thunder and Twins equipped with anything between the range of Wasp and Viking should do the trick, depending on which route you decide to take to access the flag. An Isida will definitely make the task more manageable, but due to the low player count, it may have to divide loyalties between both the offensive and defensive fronts. Use the bridge to sneak into the enemy base if you're a lighter hull, then jump on the flag and return through the central path if it isn't entirely barricaded by giant such as Titan. An Isida should be waiting for the flag-bearer in the middle, also ready to pick up the flag should the holder perish before it can reach them. Passing the flag to a heavier hull is critical, as a Magnum, Railgun, Shaft or Thunder can transform a lighter hull into a fireball before they make it halfway across the map.

There are 3 points in Camp. Points A and C are in the either corners and point B is in the middle. Upon start, points A and C will be captured by each team respectively, leaving point B to be contested. As usual, the point will go to whomever is more capable on the field with their damage and armor. Modules are useful here, especially those of the Badger and Shark families; Vulcan and Firebird are common contenders of the CP realm, and should be treated with caution. The errant Shaft is also capable of cleaning house on point A, keeping players of the opposing team from flocking over it in plain sight.

Retrieved from "https://en.tankiwiki.com/index.php?title=Guide_to_playing_in_Camp_effectively&oldid=20367"
Category:
REQUEST TO CUSTOMER SERVICE
We have recieved your request for our services and we will get in touch with you shortly.
Report a problem