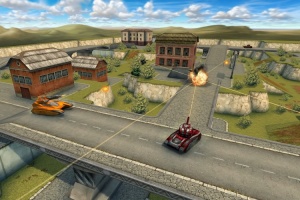 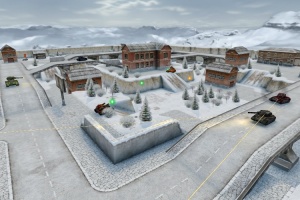 Deathmatch is not a common choice for Bridges, however it can be the grounds for an interesting battle. While not being particularly large, Bridges has a lot of open ground, meaning that there is the option for both short and long range turrets. Players can use Freeze or Firebird to traverse the lower ground underneath the Bridges and rush their enemies, while turrets such as Railgun and Smoky can be used to pick off players attempting to cross the bridges around the map.

As far as tactics are concerned, Bridges TDM plays out similarly to DM. You can choose to engage in close range combat, or try to snipe those who venture over bridges and across the centre portion of the map. Mines can be used on ramps and bridges to deter and damage the enemy, allowing your team to hold areas of the map. If you can adequately defend the ramps, holding the higher ground at the corners of the map can be advantageous in reducing the number of kills that the enemy team can achieve. Once again, lighter hulls are the most common choice, although a few medium or heavy hulls can also be useful if you aim to try and hold the higher ground and snipe enemies as they approach.

As always, medium to large hulls are recommended for defence, along with short to medium range turrets such as Freeze or Ricochet. An Isida can also be useful in healing defenders and backing up attackers.

When it comes to attacking in Bridges, you have two main options.