During the Christmas holidays 2014-2015, there was a special promotion in which you could hire unique XT versions of Railgun and Hornet and a special paint, Frost - which had 20% protection from all turrets. Railgun XT and Hornet XT had a 50% boost over normal Railgun and Hornet. The special items were in the game for twelve days and you could hire these at any time during the twelve days. The price started at 150 000 crystals for Railgun XT M0 and an additional 50 000 for each modification, which gave you the item in your garage for the whole twelve days. Each day after, the prices were reduced by approximately 30%.

An exclusive paint issued only to those who achieved good results in cybersport. Attention! This paint is a trophy given to every player who took part in the StarSeries. 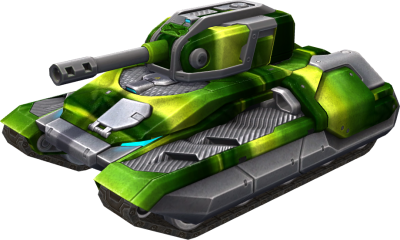 Retrieved from "https://en.tankiwiki.com/index.php?title=Gladiator&oldid=8918"
Report a problem