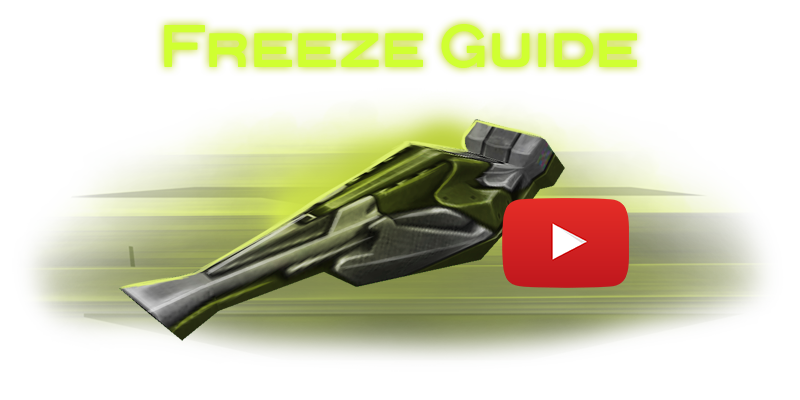 see also: Guides for Turrets and Hulls and Freeze

From the paralyzer of CTF to the sneak attacker of DM mode, Freeze is a deadly threat against any without the knowledge of how to counter it. One of the three melee-ranged weapons, Freeze ejects a cone of rime to engulf its opponents and ultimately force their momentum to come to a grinding halt. Who doesn't fancy the idea of rendering their enemies unable to retaliate? 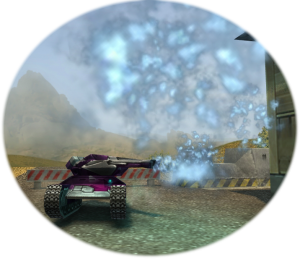 According to an old and forgotten description, Freeze is a heavily modified refrigerator mounted onto a tank. Initially, the idea seems foolish, since metal isn't greatly affected by standard low temperatures. However, a controlled injection of liquid nitrogen can quickly constrict the gears of a machine, causing them to slow down drastically. During this time, the rime begins to slowly bend the metal and render it brittle, dealing moderate but constant damage. When Freeze halts its attack, the enemy remains frozen for a considerable time, but slowly warms up after a few seconds. Keep in mind that being sprayed by a Firebird, Freeze's direct rival and closest relative, can also reverse the 'frozen' effect, as its high heat counteracts the icy coating and melts it.

Chances are, you'll most likely see Freeze on some of the faster or moderate hulls, while the slower hulls like Titan or Mammoth are usually disregarded as an effective combination. This is thanks to Freeze's short range, which requires it to move around often and chase opponents. Wasp and Hornet are some of the most popular hulls to use with Freeze, since their great maneuverability and high speed allow them to encompass their opponents entirely without staying in front of their turret for too long. Hunter and Viking also go well with Freeze thanks to their maneuverability and speed, respectively. Any heavy hull will only work with freeze on really small maps, such as Island or Ping-Pong, or single-point CPs and defending in Assault mode. Hovering hulls aren't generally as popular with freeze because it's harder to circle enemies with them, but it can be done and you'll occasionally see them floating around, chilling out their enemies.

Freeze is an interesting weapon, as it fares better against individual opponents than its other two proximity siblings (Firebird and Isida) its invaluable ability to paralyse opponents. It does fairly fell in spread out battles, such as DMs and TDMs on large maps - just creep around enemy areas and ambush unsuspecting tanks.

This niche also grants Freeze the ability to be incredibly threatening in CTF, RGB, and ASL matches as crippling flag-thieves or ball-carriers and allowing you to slow defenders should you become one yourself.

While not being able to top Firebird in terms of crowd control, it can still damage multiple enemies at once and do reasonably well in a CP or crowded TDM. And besides, Freeze will always be a threat to players unprepared or isolated.

Playing with Freeze results in very fluid combat. The "short range" compels you to continue moving and hunt down enemies, which is why lighter hulls are nigh perfect. In action, freezing them on the spot and encircling them to avoid their turret is recommended so you can survive for as long as possible. Staying in one place works rarely with this turret unless you're defending a choke point in CTF mode, such as the paths to the blue base in Silence.

Also, if you don't know how to turn your turret and you use Freeze... don't.

Using Freeze is very simple: point the turret in the general direction of your opponent and hold down the spacebar. When you let go of the spacebar or run out of charge, the turret will immediately start reloading. However, reloading a full tank takes 9 seconds, so make sure to have a place to hide or travel while you fill up. Freeze has a very limited range, which means you must be fairly close to your opponent before firing, or they will not be harmed. An easy identifier for a frozen tank is an overall light blue hue and unnaturally slowed movement. 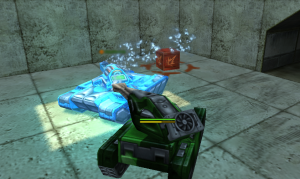 Freeze might look like the ultimate weapon with its constricting capabilities, but several less apparent drawbacks come into play upon use. First of all, Freeze only has a tad over seven seconds of charge to use at once. This may seem like heaps if you only have one enemy in your sights, but it runs out quickly when you have many enemies to kill. To get around this disadvantage, take advantage of the freezing effect and stay on the backside of crippled opponents, allowing you to focus on other attacks and potentially use their crippled hull as a buffer for incoming attacks while you reload.

The first method works best with Wasp but can be used with Hornet, Hunter or Viking when attacking heavy hulls. The concept is simple: you drive around your enemy while blasting him with a torrential onslaught of rime. Always trying to stay behind his turret to receive as little damage as possible. Remember to have your turret facing the tank at all times, as one slip can cost damage and freezing time.

If they catch on and start following you with their turret (which won't slow down nearly as much as their hull), try switching the direction you're circling in - it's often enough to throw off their aim.

When you are a level above or below an opponent, rock your tank by driving in one direction, then swiftly changing direction. This will tilt your hull upwards or downwards, depending on which direction you moved last, allowing you to change the angle of your turret's fire for a short period of time. Much practice is required before this technique becomes effective. Spraying an opponent in this way may not destroy them, but it'll sometimes connect for long enough to freeze them slightly and deal a small bit of free damage. 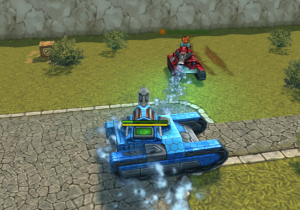 Another way to change the aim of your turret is to make use of inclined surfaces. If your foe is above you, drive the front of your hull onto the bottom of the ramp. Vary how far you drive up the ramp to adjust the vertical aim of Freeze. Opponents catch on to this trick very quickly, though, and will back away. You must be able to aim quickly before this tactic becomes effective! You can likewise attack from above by placing your entire tank onto the ramp's surface, allowing you to spray everything below.

You will never be a great Freeze user if you don’t enjoy freezing your opponents till they can barely move. So whatever you do, make sure you follow this one, final tactic:

For more information, check out the Pro's advice on Freeze in the Tanki Online V-Log here
Retrieved from "https://en.tankiwiki.com/index.php?title=Freeze_guide&oldid=39092"
Category:
REQUEST TO CUSTOMER SERVICE
We have recieved your request for our services and we will get in touch with you shortly.
Report a problem