Damage display is a function that helps the player to see during the battle how much damage was done to an enemy tank or how much health was restored to himself or his ally.

Note 1:The function can be disabled in Account Settings.
Note 2: Only your damage/healing numbers are shown.

What is damage and how it's dealt

Damage is an indicator of how much a turret has dealt to another tank, each turret displays a different amount of damage dependent on the modification of the turret, from the weakest to the strongest (from M0 to M3). Accordingly, the price of the junior modification isn't high. You can already try the most popular tactics at junior ranks without having to spend a large amount of crystals. But it's impossible to get everything you want at once. Particular guns and modifications can be purchased only with a certain rank.It’s important to know that some guns in the game have a maximum range. On distances greater than this range these guns may do no damage at all, see also: Turrets.

How to increase damage dealt

Apart from each turret displaying a different amount of damage, dependent on the modification of the turret. Parameters of these turrets can be upgraded further to increase damage dealt and others. M0 and M3 turrets need 20 upgrades before reaching the next available modification of the turrets, whilst M1 and M2 only need 10. Similarly 'Double damage' can be used to double the amount of damage your turret deals for the next 30 seconds. see also: Supplies.

The mapping is divided into four types: 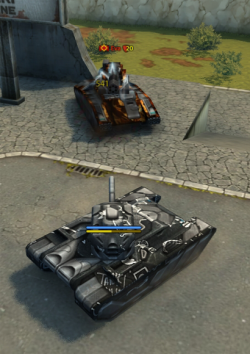 How to reduce incoming damage

Each turret displays a different amount of damage dependent on the parameters of the turret and its modification. Similar to this, hulls with a higher modification and more upgraded parameters have more health. M0 and M3 turrets need 20 upgrades before reaching the next available modification of the turrets, whilst M1 and M2 only need 10. Likewise Firebird has a burning effect which ticks a tank starting from the moment when Firebird's attack ends, that the enemy tank suffers from afterburn and receives burning damage. This can be reduced by activating a Repair Kit, instantly restoring 1000 hit points(hp) and reduces burning and freezing effects. (Additionally restores 3000 hit points over 3 seconds). Similarly Double armor can be used to double the amount of armor of your tank for the next 30 seconds (decreases incoming damage by 50% to the original).

Modules are special elements of a tank, the purpose of which is to protect your war machine from enemy fire. Modules work by reducing incoming damage. This is useful to remember in battles, since if you shoot at an enemy far away and see that you are dealing less damage then usual, it means that the enemy is using a module with protection from your turret and/or a Double Armour supply, unless you are using a gun like Thunder/Smoky, which deals less damage at greater distances. see also: Supplies.