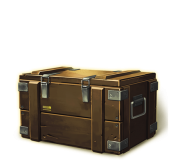 By opening this container, you will get a random skin from the XT, LC, or PR series. If you already have the whole collection of XT, LC, and PR skins, your reward will be 20 000 crystals instead, if the containers are from the monthly challenges.

A special container that is available in the Shop for a limited time they are similar to Tankoin-Containers but with different rewards, you can buy 1 for 10 Tankoins, purchasing one can give you a chance to win a variety of cool prizes, INCLUDING Tankoins.