By opening this container, you will get a random skin from the XT series. If you already have the whole collection of XT skins, your reward will be crystals instead. 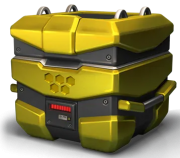