Chat is the main medium for communication between players. It is available in the lobby, as well as in battles. There is also a Clan chat available to players, who are part of an in-game clan.

The chat has many uses, such as finding new friends, discussing the game, asking questions, coordinating with teammates, and many more. Players are free to talk about anything as much as they want, as long as the conversations do not violate chat rules.

The game has a team of specially trained volunteer players called Chat Moderators, who answer players' questions, give advice and make sure the chat is always in order.

How does the chat work?

After completing the registration, you can't see the main chat or use the game chat until you reach the rank Master Sergeant. Also, if you are a lower rank than Gefreiter, you'll be given a guide in the main chat of how to play Tanki Online. There are two chats in Tanki Online: the lobby chat and the battle chat. The first one (the lobby chat) consists of multiple channels and is available on the left side of the screen while a player is looking through the battle list or the garage. Messages sent in it are visible to all players that are viewing that chat channel at the moment.


It is also possible to write a message addressing a specific player by clicking his or her nickname and picking "Write publicly" or "Write privately": 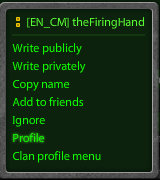 Note
Nicknames of banned players in chats will be shown as regular text, without any highlighting.

This is how "Write publicly" and "Write privately" work:

The battle chat is accessible during battles. It is activated by pressing Enter and is visible in the lower-left corner of the screen. Sent messages will be visible to everyone in the battle. In the case of team battles (TDM, CTF, CP), the player has the option of either sending a message visible to everyone or sending a message visible only to his/her team. To switch between these two modes press Tab while the chat window is open.

By selecting a player's name you can send him/her a Private Message which will be visible only to you and to the other player. You don’t need to be on the same server to exchange private messages as the system works across the entire cluster. The only requirement is that you and the person you are talking to are both online.


After sending a private message one of the following events will happen:

The following activities are not permitted and will result in (at Administration discretion) a temporary or permanent suspension from the chat:

How do I send a message to my team members only?
Press Enter to open a chat window. Then press Tab to switch between general messages and messages that are sent to your team only. The color of the chat entry window should become the color of your team.

How can I add players to my blocklist or remove them from it?
This can be done by entering the following commands into the game’s chat:

How to report Battle Violators

To report violators in the battle, you can use the /vote NICKNAME command, or follow these simple steps for an alternate way:

In the recent Communicator Panel update, the Chat tab was split into various group chats, each one designed specifically for a major subject in the game. These as are follows:

see also: Assistants of administration and Heads Up Display

Within the chat, some users have special icons next to their name's. These are helpers of the game who have received a recognizable icon due to the nature of their work. A list of all the chat icon's and their representations are below:

The Anti-flood System is an automated system designed to stop and limit spamming and flooding in the lobby and battle chat.

The Anti-flood System works by restricting the number of characters over time. The restriction may not necessarily apply to the whole message, but even to a part of it. If you’ve used up your quota of characters for a set period of time, the extra ones will be highlighted in red, and instead of the “Send” button, you will see a timer telling you how long you have to wait before sending a message of such length. You can simply make the text shorter and send it, or wait till the time restriction is removed.


Of course, if you’re well behaved in chat, the anti-flood system will not affect you in the least, except for the fact that you will see less flooding in the chat stream.

The Anti-flood System can and may issue warnings and even bans ranging from five minutes to an hour to people who are spamming or flooding in the chat. If a person starts spamming, he or she will first receive a warning from the automated system. It looks like this:

If the warned person ignores the warning and continues to flood or spam characters in the chat, he or she will receive a five-minute ban from the chat. This ban may look similar to one issued from a moderator, but it is very different. This kind of ban, when issued in the lobby chat, looks like this:

When issued in the battle, it may look this:

If the same person has received many five minute bans regarding flooding and spamming, the server may put a stop by issuing an hour ban. This final ban had a time limit of one day; but due to false-positive errors, it was changed to the hour ban we know today.

One of the most lodged complaints regarding chat moderators is due to the inability of the user to distinguish between bans issued from the Anti-flood System and a ban issued by a moderator.


One of the key differences is that the automated ban system only issues a warning, a five-minute ban or an hour ban; all regarding the flood. These warnings and ban statements neither have a signature nor a direct hyperlink to the Rules page. On the other hand, moderators can also issue warnings and bans of the same time period. These usually contain a customized statement or a personal signature with a hyperlink to the Rules page.


Moreover, it is easy to spot an automated warning/ban as it is issued almost immediately after a person floods in the chat. This is unlike a moderator-issued warning/ban, as it takes some time to issue them after a certain rule has been broken.


For example, here are some example of flood bans issued by moderators:

Examples of automated bans have already been mentioned above.