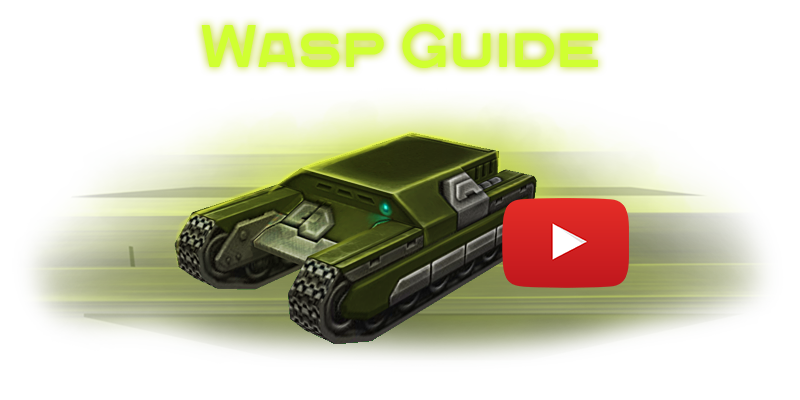 Wasp is the fastest and the most (easily) maneuverable hull in the game.

By size, Wasp is the smallest hull. It takes great skill to constantly hit a Wasp in motion.

With a Nitro, Wasp becomes an unstoppable rocket, which can fly over large distances in several seconds.

Wasp's weight allows it to maneuver in such a way that it can hit targets far above and below it.

Paying for high speed gives a low amount of health. To survive on Wasp, it’s necessary to avoid head-first encounters with enemy tanks by damaging the opponent and immediately changing position.

Wasp is very susceptible to physical effects - simply, it’s shaken even by the slightest wind. Under dense fire, it’s hard for a player on Wasp to control the movement of the hull. The recoil from your own turret can also affect Wasp - for example, shooting sideways while in the air will likely result in Wasp flipping over.

Wasp looks best with close-range turrets such as Isida, Freeze, and Firebird. Its high speed allows you to dramatically reduce the battling distance and use the weapon as effectively as possible. Turrets of mid and long-ranged battles are less preferred with Wasp, because they don’t let it fully reveal its potential, but various options are used by experienced players. Wasp is a very fast hull that lacks armor, generally paired with freeze wasp can be an issue to deal with. To counteract wasp's lack of armor this hull can be used with Defender drone to further its armor and will be even more effective when micro-upgraded and with freeze, players can come in close contact with their opponents giving them not much room to maneuver. That being said Wasp's overdrive is much more effective when paired with Freeze

Wasp’s best qualities are shown in CTF mode, and more specifically in bigger maps, where there are hiding places and where you can gather speed. Wasp is an ideal machine for capturing flags, so you need to keep your health as full as possible and stay invisible from the enemy. Wasp's bomb explodes after 3 seconds causing tremendous damage, the damage radius is not too large so freeze is the perfect turret disallowing enemies to escape and can be an effective tool to kill the Juggernaut. However, the freeze is also a close-range turret and so players will have to come in close proximity before detonating this devastating combo.

- Wasp was in the game from the point of its creation and was served as a tank of a beginner - the modification M0 was given to all newbies at no cost.
- Wasp’s turret is shifted backward. Therefore, while playing with a close-ranged turret, it’s definitely worth turning your tank and driving stern first (backward, while keeping the turret facing the direction you’re driving) to reduce the distance of defeat.
- Format battles Wasp + Railgun (BP) can often be found on the servers.

Similarly, wasp's bomb can be used as a tool to prevent enemies entering certain areas and so used to catch Gold Boxes and you can put the bomb leaving at least two or three tanks in the danger zone, therefore getting free kills.