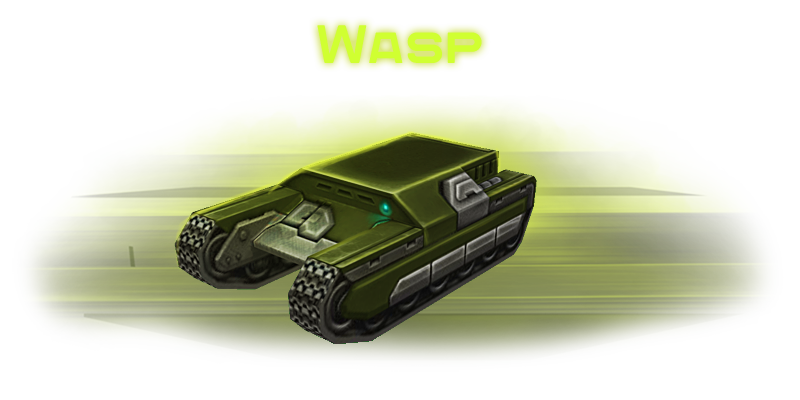 The classical light tank, Wasp has been around since the game began. Its weak armor is fully compensated by its great speed, coupled with a compact size that leads many tankers to draw parallels between Wasp and a typical RC car. This speed, while uncontested, can be a double-edged sword when you're making a desperate getaway: one false keystroke or poorly-driven ramp can bowl the tank sideways. On another note, Wasp is one of the three hulls that does not have a central turret, making peeking from behind buildings a much less risky task, but leaving the hull more unstable if you're utilizing a weapon with recoil. In a nutshell, if you've simply gotta go fast with no strings attached, then look no further than Wasp.

Light hull. It has the fastest maximum speed. Overdrive plants a bomb with a timer.


A small light hull, “Wasp” can look dismissable only to beginners. Small size and high speed grant true freedom on the battlefield, but its speed and maneuverability are a pleasant extra benefit. From the structure of the hull, all of the unnecessary parts were removed, including armor, to allow the installation of the incredibly powerful N2-bomb. This tool for opening up any defense is actually a tiny thermonuclear round, which can be dropped without losing speed and enabling the tanker to quickly ditch the future hot spot. Extraordinary fireworks are always better observed from a nearby cover.

Retrieved from "https://en.tankiwiki.com/index.php?title=Wasp&oldid=40105"
Category:
REQUEST TO CUSTOMER SERVICE
We have recieved your request for our services and we will get in touch with you shortly.
Report a problem