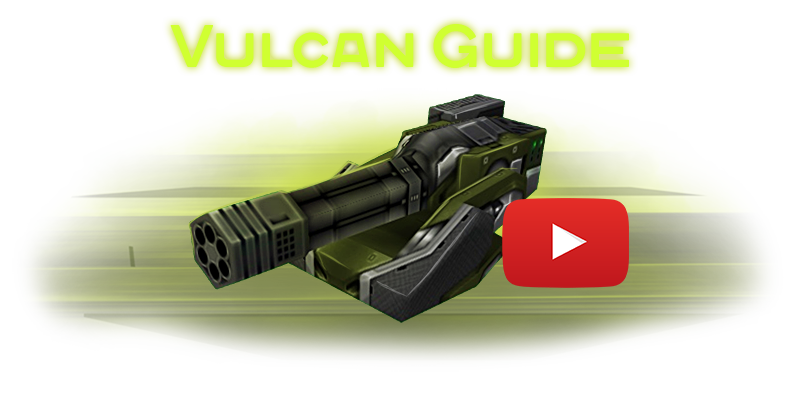 Vulcan is quite the difficult machine to master. Unlike any other turret, Vulcan features a gyroscopic-rotation that stabilizes its aim under even the strongest of bullet hails. This feature can either make or break a user from keeping the weapon as a permanent fixture to their tank, along with a number of other factors, so it'd be an astute decision to give this page a thorough examination whether one owns the weapon or not.

We can safely say that Vulcan's release was the "big thing" during its time. A new weapon always is guaranteed to raise eyebrows, but Vulcan perhaps more so than others. With an unlimited charge, gyroscope and even a self-damage feature, many are still yet to come to terms with this trickier-than-expected weapon. But seeing a Vulcan wielded by a top player is enough to scare anyone - it by all means has the potential to tear hapless crowds apart.

Continuous stream of fire excellent for suppressing multiple enemies at once.

A gyroscopic rotation feature that allows Vulcan to stay facing the direction it was firing, regardless of the hull's movement. This makes it very difficult to ruin this weapon's aim.

Respectable auto-aim angles that allow you to strike a multitude of different altitudes from one location.

Enough steady impact force to ruin the aim of players using Wasp, Hornet, and even Viking.

An overheat feature kicks in after firing continuously for a while, making it difficult to sustain fire indefinitely.

Somewhat like Shaft, Vulcan's rotation speed decreases when preparing to fire and during fire.

Driving properly with a fixated turret is easier said than done, and most first-time users will be baffled trying to control it properly.

There's a slight delay upon firing and ceasing that can cause players to miss their targets if they don't time properly.

"Gyroscope? What?" Many players have come out of test runs or practices with Vulcan very confused by this auto-turning feature. Admittedly, it is a tough feature to master. But, let's establish firstly and foremost what it does. This is the most important thing to learn should you be interested in using Vulcan. The gyroscope only takes affect when you begin shooting. During the firing process, your turret will continue to face and fire in the direction it was facing before you began firing, and the only way to change this is by using the 'z' or 'x' keys (or '.' and '/', for all you WASD players out there) to rotate your turret.

In a battle situation, this means that your aim cannot be compromised if they're trying to shoot your hull. Usually, with weapons like Railgun or Smoky, this is bound to occur often. Vulcan is completely unaffected by its hull's readjustments, be they voluntary or otherwise, and continues firing borderline perfectly at them.

However, more likely than not, your enemies are going to be on the run, and they won't stick around in one place and wait to be pulverized. As a Vulcan user, you're going to have to learn how to adapt to your hull and turret not cooperating with one another. Remember that your hull and turret rotate at different speeds, and keep your focus more on hitting opponents instead of dancing about them with your hull.

When using Vulcan for the first time, it'd be best not to throw caution to the wind entirely and play like you would with any other weapon. Begin with basic maneuvers, such as ducking in and out of cover while shooting. This way, you can become accustomed to making minute precision adjustments when targeting opponents, as one would perform with a standard turret or hull. This will also allow you to witness firsthand how long your turret will last until it begins damaging itself.

Once you've mastered camping and popping out of cover, you can begin to take the road less traveled and start honing your travel skills with Vulcan. The most important tactic of close-ranged Vulcan combat is not to engage in it, should circumstances allow. With its slow rotation speed upon firing, you'll need all the distance you can get when tackling any opponent.

It is imperative to know which side of the hull you're using is the front or back. For experienced players, this is a no-brainer, but when Vulcan's gyroscope effect locks the turret into one place, players tend to forget which way is forward and which way is backwards.

With this out of the way, the next step to understanding how to use Vulcan's differential rotation properly is to separate the mental link made between turret and hull. Thanks to the gyroscopic effect, when initiating combat and winding up the barrels, the solidity of hull and turret disappears completely, letting the turret continue to face whatever directional plane it was facing and letting the hull drive independently. The mindset of "if I turn my hull right, my turret, too, will turn right" is not applicable here; only your turret rotational controls can change the direction of the turret.

Because of this, when driving about on the field, your firing range (should you choose not to move your turret at all) would only shift from side to side, instead of scattering about at random. This is effective for sweeping enemies that are down a longer corridor (e.g. Dusseldorf, Berlin), and with minute adjustments, you'll be clearing out multitudes of enemies in no time at all.

Before spraying its trademark trail of iron, Vulcan requires a second-long windup to get itself going. Considering this, it'd be an astute decision to hold the spacebar down before leaving the shelter of a building, wall, etc., instead of driving out of cover to stand there like a fool.

It'd also be wise to let them wind down after you've returned to cover, too, since you'll want to provide maximum suppression during your time on the open field. If you can avoid it, try not to spin the barrels once more immediately after suffering from overheat since that damage tends to accumulate and stack upon itself if residual burn still remains.

Since overheat damage is another trademark characteristic of a well-used Vulcan, it'd be wise to cover this aspect as well; rather, the methods of avoiding it entirely. When you've finished off all the enemies you needed to in that timeframe, feel free to let go of that spacebar before the yellow disappears and the tank turns red. Since it only takes approximately two seconds to deactivate and re-initiate barrel spin, you're not losing a lot of time after releasing the spacebar.

On the other hand, however, if you've picked up a Double Power and feel like absolutely letting loose, you can unload a mountain of bullets into a great number of tanks by not letting go of that spacebar. This is far more effective at dishing out damage than the aforementioned tactic, but it's fairly reckless -- considering that the burn damage lasts for more than a quarter of a minute at Mk7, letting the overheat resistance bar run dry for too long is essentially suicide after a certain point, even with the Heat Resistance augment and heavy hull. However, the Heat Immunity augment will provide immunity from overheating and won't be needing to worry about it and you may fire non-stop without receiving any damage.

Vulcan is not a weapon to use for flag-carriers. As we've established, it's pretty difficult to shoot properly while driving - and even if you've mastered this, the purpose of Vulcan is its fantastic damage per second rating from range. Vulcan is also brilliant at precise accuracy from distance. To avoid wasting your turret's wonderful abilities by running into short-range confrontations. You will sometimes win, so long as nothing gets behind you, but it's a waste of a wonderful weapon. Of course, there are unavoidable events, such as when you have to return a flag, but if you can avoid such circumstances, do so.

The Heat Resistance augment is an excellent choice to equip to your hull if you wish to use Vulcan and don't want to receive too much self-damage from overheating. But it will reduce the advantage of the incendiary band augment in terms of activation time if you are using it. Another choice is to equip heat immunity for your hull and you will not have to worry about the overheating of your tank since it will provide 100% protection from self-heating damage. However, in this case, the incendiary band augment will take longer for it to activate.

Vulcan is an eye-in-the-sky type of weapon, similar in playstyle to Shaft and Railgun: distance control. Since Vulcan is pretty much allergic to tanks getting behind it, a suitable location for one would be propped up against a wall with an excellent view of an enemy base or popular traversal route. That's the primary assault method that most Vulcan users love dearly, but that doesn't mean that they're not much good defensively. Rather, they're more likely to thrive there than closer to an enemy's base, where the distance between them and their assailants is more than comfortable.

As a Vulcan, eye-in-the-sky sentinel, the job at hand is obvious -- make like an MG42 and lay down some cover fire. If there's a lot of tanks clustered together in one spot, blanket spraying is quite effective at whittling them down for your allies to handle with more ease. However, selecting the more prominent threat can grant more reward for a team if they're having trouble countering a certain player. You're not invincible, though, and if you can shoot them, they most certainly can shoot you, so make it a habit to create contingency plans and plot escape routes should you suddenly be turned upon. You won't do any good to your team dead, and most certainly with little charge.

For more information, check out the Pro's advice on Vulcan in the Tanki Online V-Log here.

Retrieved from "https://en.tankiwiki.com/index.php?title=Vulcan_guide&oldid=38334"
Category:
REQUEST TO CUSTOMER SERVICE
We have recieved your request for our services and we will get in touch with you shortly.
Report a problem