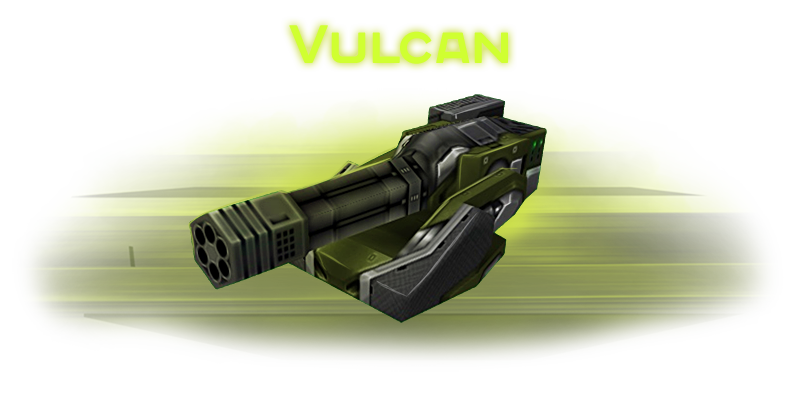 Vulcan is Tanki Online's first installment of a true shell-based, fully automatic machine gun. As such, it can fire a stream of small bullets for a virtually indefinite amount of time, dealing with damage effectively at medium and long ranges. However, this indefinite fire rate has a significant drawback: after a certain amount of time that the barrels are kept spinning, the weapon will begin to cause the entire tank to overheat, taking cumulative damage parallel to that of Firebird's lasting burn effect. Vulcan also features a one-of-a-kind gyroscopic effect, makes the turret partially independent of the rotation of the hull. This is a double-edged sword: it makes it harder to knock off a Vulcan's aim, but also makes it harder for the user to assist aiming using their hull.

Anti-tank machine gun with medium range. Six barrels allow incredibly fast rapid fire. After prolonged use will overheat and light itself on fire.


Tank turrets are cool, but sometimes, you want to shred the enemy into tiny pieces, without thinking about such tactical nuances as reloading. This turret right here is the solution to all of your problems. A stack of six barrels, unbelievable firing speed, and an automated stabilizing system with armor-piercing rounds. Unlimited armor-piercing rounds. So many rounds, that during the barrage not only your barrels can overheat, but your whole tank. You might want to continue shooting, but that might lead to your tank catching on fire, which is fun. But you can also ask your allies for help, since Freeze can cool you down, and you won’t have to stop the madness. High firing speed has its drawbacks in precision controls. Hydroscopic stabilizers will slow down the turning speed while firing, to prevent the turret from locking up. In any case, all of these small details shouldn’t distract you from splitting enemies in half.

Retrieved from "https://en.tankiwiki.com/index.php?title=Vulcan&oldid=39885"
Category:
REQUEST TO CUSTOMER SERVICE
We have recieved your request for our services and we will get in touch with you shortly.
Report a problem