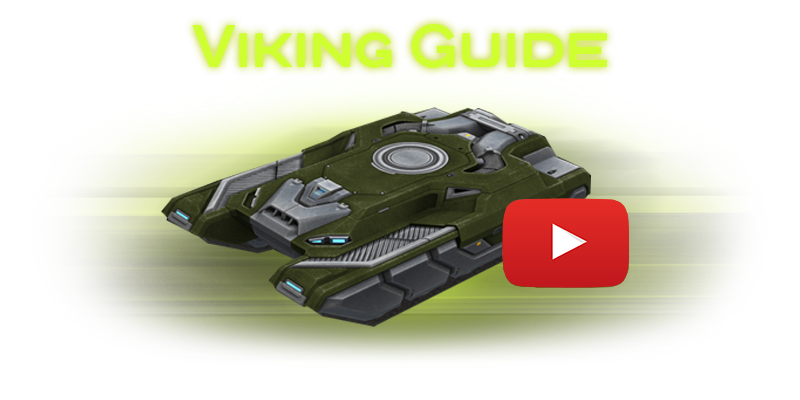 Well-armored and can withstand quite a lot of damage.

It’s short, which lets it avoid being hit in some cases.

Fairly stable, wide and heavy -- it’s hard to push a player who’s using Viking, make him lose balance or knock off his target and make him miss.

Sometimes it isn't fast enough to reach the enemy base on full health without using drops or supplies.

The shortness often makes it difficult to attack targets which are located on a higher level than Viking.

What to do when using Viking

Viking, a second tier hull, Viking is the second of the two 3 medium hulls. Viking, a more popular choice to players as a well-balanced hull overall with good armor and decent enough speed. Viking's overdrive is very offensive significantly increasing your turret's damage and firing rate for 7 seconds, however Viking is still a great choice for defensive use.

Viking feels best in company with mid-ranged and long-ranged turrets - Smoky, Thunder, Ricochet, Railgun and Shaft. Viking can also be used with short ranged weapons in medium-small maps, but it has to keep hidden. Viking's overdrive has a very powerful effect and so can be used with turrets in which the opposing team has protection due to the high amount of damage.

Viking is perfect for any game mode and map. On large maps Viking usually stays in defence, and supports the attacking teammates with fire, on small maps -- Viking itself successfully attacks. When using supplies, it becomes a more versatile hull. Viking's overdrive is very effective in clearing out bases and destroying the Juggernaut in quick succession, that being said Viking works well with almost any type of Assault/Defensive drone, when paired with Booster drone Viking's overdrive is almost unstoppable destroying anyone in its path. Similarly a fully micro-upgraded Defender drone and Viking M3 can survive a full salvo of 6 rockets from the Juggernaut!. Viking overdrive is also great for maps like Solikamsk assault mode, in which you can shoot enemy team directly almost all the time and other maps with relatively open bases.

- Viking was introduced in the game in Spring, 2010.
- Players like Viking for its brutal appearance, firmly associated with real tanks.