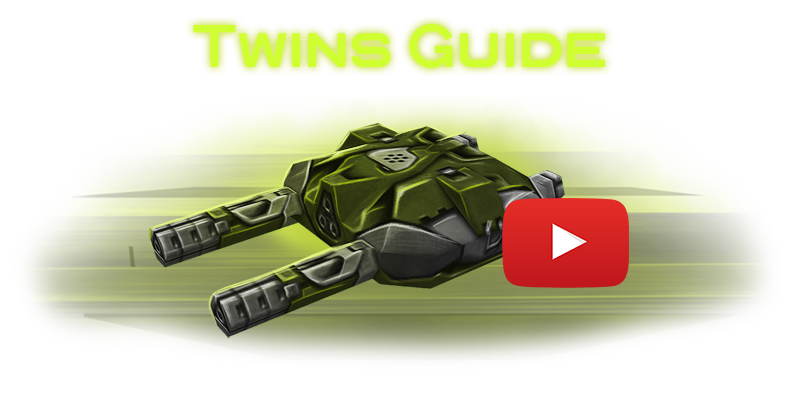 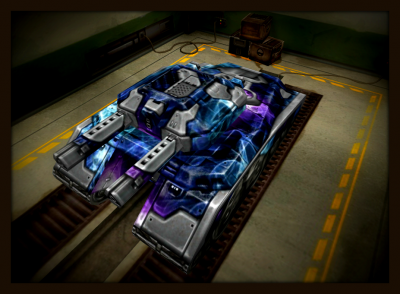 One of the only two weapons with infinite and high-frequency ammunition, Twins also happens to be one of the two plasma-based turrets in the game. This unorthodox combination of traits grants its unique capabilities in Tanki Online that no other turrets have access to. The purpose of this guide is to define and explain these minute differences and changes, to aid a player in understanding how Twins can be used on the battlefield to the fullest extent.

Twins has been around for quite some time, being one of the first guns to be released in the game upon its opening. Its balance against other turrets, particularly Ricochet, has also been quite the topic for debate. At first, several tankers noticed that the knockback for Twins initially was much too high, barreling over even the heaviest of hulls with a continuous stream of shots. In the end, the developers addressed this problem and dropped the impact force a significant amount. However, it still remained a cheap and effective gun, M3 only being 500 crystals at the time (this was before the currency rate was multiplied tenfold thanks to the rebalance). Several tankers were dissatisfied and wished for the impact force to be dropped even further, but their attempts were in vain, and Twins remained untouched for a considerable amount of time by updates. However, in place of decreased impact force, Twins had now acquired a hefty damage output per shot, performing more of an offensive role than an interference role.

In many cases, the Fear Machine (i.e. an ancient variant of Railgun) used to beat Twins in almost every single circumstance, but with the balance change, Twins was rendered more powerful in terms of raw damage, it now had enough power to successfully go toe-to-toe with the tyrannical turret of the time. The winning mechanic for Twins everywhere was their rapid and steady damage output combined with near-constant impact force, a unique characteristic at the time. Soon, it effectively replaced Ricochet as the "Drugger's Choice" weapon.

Somewhat more recently, twins underwent a change that added a splash damage to its projectiles, a controversial update that was luckily accompanied by the introduction of an augment that (nearly) reverses the effect. 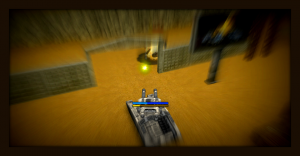 Gameplay with this gun varies greatly with the speed of the hull you're using, but it can be quite the experience regardless of which is used.

Sometimes this gun is used with a hull of gargantuan proportions: such as Titan, Ares, or Mammoth. Under close-ranged, minimal cover circumstances with plenty of supplies, Twins can really shine - the infinite ammo complements the high HP of heavy hulls well. Using twins this way isn't completely ineffective within the boundaries of No-Supplies PRO matches either - a skilled handler of the weapon can turn the tide of a game one way or another.

Medium hulls, especially Crusader, can be an excellent carrier of twins, still able to take advantage of the prolonged fire while having a bit more speed to make up for the slop projectiles.

Light hulls are less popular with Twins, but they are still occasionally used. The low recoil makes them unlikely to flip, but the turret doesn't shine especially brightly with them. 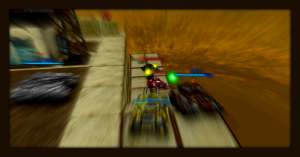 If a player lets one of these machines get up close and personal, they may as well begin writing out their will, as attacking a Twins at close range is borderline suicide. In order to effectively survive an encounter with one, there needs to be a considerable amount of distance between you and your double-barreled foe. If it can't reach you, it can't do damage; this fact makes Shaft, Railgun, Smoky, Thunder, and even its steel-shelled cousin, Vulcan, make up this weapon's greatest adversaries.

Another method of survival is outmaneuvering a Twin's projectiles, since unlike Vulcan, bullets do not quickly impact, but instead drift through the air like a dandelion seed. This is one of their most dangerous flaws since quick hulls like Wasp and Hornet have the potential to dodge many bullets from even moderately close ranges. The variation of the projectile path can also be derived from the namesake of the weapon: its twin barrels, requiring constant changes in targeting if a player wishes for an accurate shot each time.

However, this also gives the Twins its greatest asset: suppression. A wall of neon projectiles from one direction means that very little is going to get past it unscathed.

One final way to counter twins is to push up against the hull of the user. It's a last resort, since you'll take every shot and its impact, they will get worn down too, thanks to the small splash damage range that the shots have.

In combat versus a skilled Twins user, a tanker will receive respectable damage regardless of what range they're at in Twins' damage spectrum, so the best form of prevention may also be the most passive: modules. Should you happen to have the Panther Mk7 module (if you do, you're probably a bit too seasoned of a player to be reading this guide due to anything but wanton knowledge thirst), you have an incredibly valuable asset in having nearly 50% Twins resistance. Though twins deals somewhat frequent criticals, the module will still take the brunt of the damage. 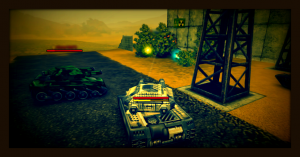 Though it may be tempting, plunging into the fight is not always the best way to use this gun. Granted, getting close makes it easier to hit people, but its suppression ability and lack of any damage dropoff is also fantastic for moderately-ranged crowd control as well.

Another word of advice: Twins do not automatically translate to "equip to Titan". As a matter of fact, in a lot of cases, Hornet/Twins or Wasp/Twins can be quite the pain in the stern to defend yourself from if they know how to aim. High speed, a cumulative damage output, and impact force to boot -- it's akin to a less damaging but more annoying version of Wasp/Firebird. Not only do they have the speed to be useful for more than defending, but they can also get themselves out of hard places involving other close-ranged weapons by using their impact force while driving away to slow them down drastically.

A last, more obvious note: if you have a buddy with Twins as well, you're likely to be unstoppable on the field. The greater the amount of suppression - that is to say, constant damage and impact force - on a specific location, the more control that team has over the field. This is especially important in CP mode.

Twins has a four powerful augments - powerful, that is, if you know how to use them.

For more information, check out the Pro's advice on Twins in the Tanki Online V-Log here.

Retrieved from "https://en.tankiwiki.com/index.php?title=Twins_guide&oldid=39118"
Category:
REQUEST TO CUSTOMER SERVICE
We have recieved your request for our services and we will get in touch with you shortly.
Report a problem