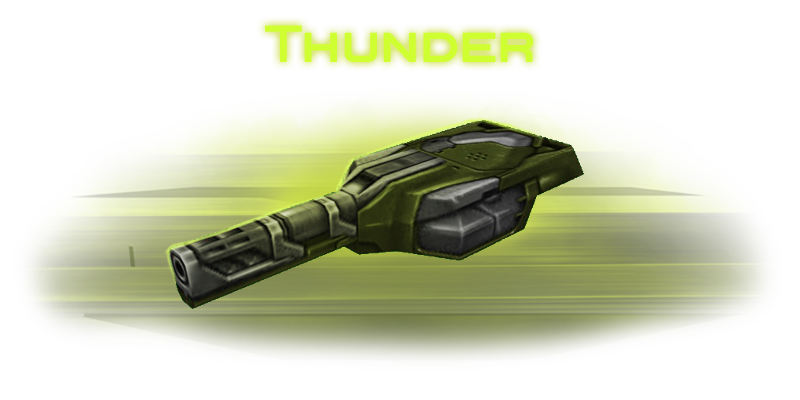 A close relative of Smoky, Thunder has a similar function in terms of shelled projectiles fired at an infinite range with diminishing power, but there are a few factors that allow it to stand out from its older sibling. Thunder shoots at a much slower rate, but it has incredible power at medium ranges, a solid middle ground between the aforementioned peashooter and Railgun. The more notable feature of this weapon is the shells' nasty habit of fragmenting violently upon impact, dealing considerable damage in a radius around the target. This makes Thunder an excellent choice when playing on single-point CPs, as it can concentrate its fire near the point and injure several tanks at once from a distance. Just keep a fair distance between your opponents, lest you wind up hurting yourself with your own explosive splash.

Medium range turret. Highly explosive projectiles can hit several tanks at the same time. Explosions from the shots can also hurt your own tank, be careful, and avoid battles with close proximity to the target.

This medium-range turret was designed with a rich history of using the legendary Smoky turret in mind. The best choice for fans of intense, dynamic battles. Its payload consists of new-generation armor-piercing shells. Such rounds can hit a group of enemies, and the relatively fast reload will grant you the advantage over heavy enemy tanks. But be careful -- in close quarters it is very easy to damage your own tank. In combination with a fast hull, Thunder can turn into a deadly weapon in the hands of a seasoned tanker. Not so seasoned tankers do not exist, since they tend to blow themselves up very quickly.

Retrieved from "https://en.tankiwiki.com/index.php?title=Thunder&oldid=39886"
Category:
REQUEST TO CUSTOMER SERVICE
We have recieved your request for our services and we will get in touch with you shortly.
Report a problem