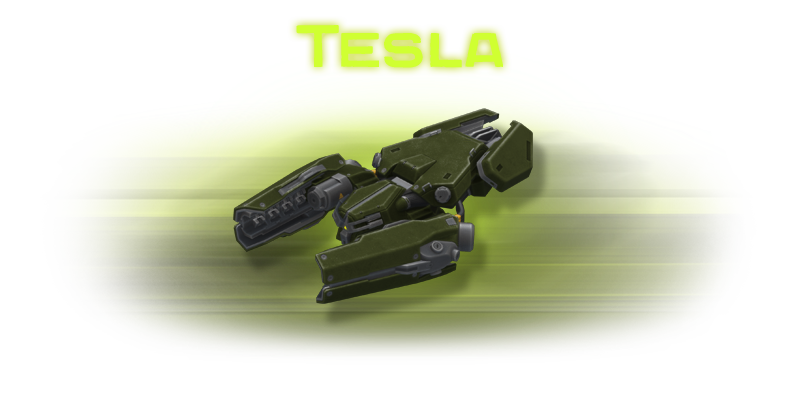 Tesla is a unique electrifying turret that can fire in 2 ways. Firstly, its taser-like lightning chain function allows you to hit enemies at melee range with regularly-spaced zaps by holding the spacebar. Pressing the spacebar once activates its ball-lightning generator, releasing a slow-moving node that connects and strengthens your lightning shot to hit enemies that are hidden or farther away. Tesla can also connect to multiple enemies at once, splitting its regular damage evenly between all connected enemies, and using hulls (enemy or friendly) to extend the reach of its chain.

Melee range turret. While holding the fire button, a lightning «chain» attacks opponents. You can use the lightning ball as a «link» in the chain to increase the length of your lightning.

It’s quite straightforward to be electrocuted during the tank operation: just ignore safety regulations while using supplies. However, electrocuting somebody else is a much more difficult task. The tank’s insulation is pretty good and every tank is earthed. The only option to deal damage with an electric shock is to shoot a high-voltage wire right into the armor. A prototype of a taser turret could not match other melee range turrets. All attempts to make this prototype able to shoot at large distances have failed. Everything changed when blueprints of the special type of transistor coil of one of the greatest inventors, Nikola Tesla, were found. The new transformer made it possible not only to shoot opponents with high voltage at large distance but also to use armor of other tanks as intermediate coils to increase the shooting range. An unforeseen short circuit on the test bench showed the rarest phenomenon ― a ball of lightning. Ignoring all the safety regulations, engineers shot a chain of lightning straight in the direction of the ball lightning. Lightning struck the ball and reached the nearest group of tanks, hitting a whole battalion of brand new tanks. This case demonstrated the undeniable tactical capacity of the turret. However, a requirement was set ― every tanker should pass the examination on security precautions of using high-voltage transistors and always have the technical manual in a tank. They say that some tankers put it between the seat and themselves.

Retrieved from "https://en.tankiwiki.com/index.php?title=Tesla&oldid=39985"
Category:
REQUEST TO CUSTOMER SERVICE
We have recieved your request for our services and we will get in touch with you shortly.
Report a problem