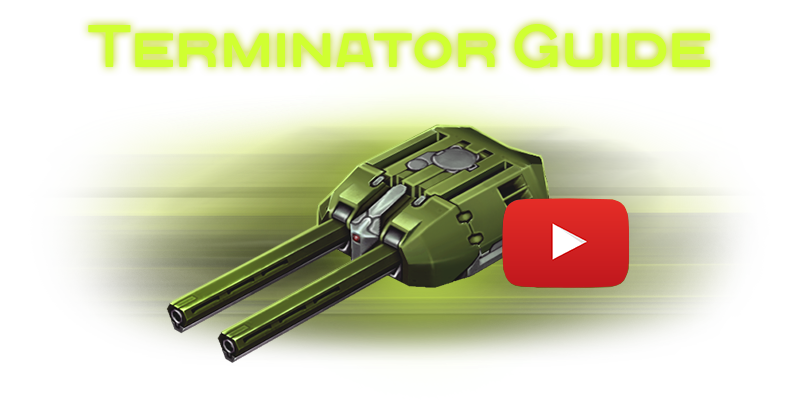 Terminator is a special turret that sports the ability to fire in two different modes. Using the long dual barrels, it can send out concentrated bursts of energy that penetrate the armor on enemy tanks and deal damage from the inside out. If cool effects aren't your thing, Terminator can also deploy its rocket launch system from the sides, lock on to enemies with a laser, and shoot a salvo consisting of six rockets.

In order to perform well with the Juggernaut and Terminator in modes like Team Juggernaut and Solo Juggernaut, you will have to be well informed about the speed, health, and damage of the Juggernaut you’ll play with, which ultimately depends on the upgrade levels of your current tank. The higher your Gear Score the better!

Juggernaut and Terminator is a very special combo, out-damaging any other combo in the game as well as being more sustainable in terms of health than any other hull. This is interesting because it provides various types of gameplay; you can either play very aggressively or very safely. Selecting the gameplay style you like also depends on which game mode you are playing in, either Team Juggernaut or Solo Juggernaut.

In Solo Juggernaut, you would want to find a suitable 'camping' place for protection that will at least mostly cover yourself, and to beware of enemies’ turrets and tactics for killing you. If you don’t do this, you may find yourself at half HP or even less before you have the chance to get a considerable amount of kills!

In Team Juggernaut, you can also play the same as you would in Solo Juggernaut, but you do have teammates that can help you manage a safe amount of HP by destroying any enemies coming to destroy you.

Beware of various turrets that can be a serious threat to Juggernaut, such as: Railgun, Shaft, Magnum, Striker, and Gauss. This is not to say that other turrets do not deal a good/consistent amount of damage to the Juggernaut, these are just the turrets that can easily lower a Juggernaut’s health both at range and very quickly. With this being said, the protection modules used are very important; you only have four protection module slots, choose them wisely.

Next, I'm sure you have noticed this if you have played in any form of the Juggernaut mode before, the Juggernaut hull is very massive and moves very quickly; sure, this is good, but this also means that you have to be aware when moving through tight spaces and around the map and try your best not to get stuck between obstacles on the map. Just as a general rule of thumb, if you are unsure if the Juggernaut will fit or not, avoid that particular place on the map, as wrong judgment could leave you very vulnerable and an easy target for all.

The Juggernaut hull has a unique Overdrive, as mentioned earlier, which reloads approximately every 40 seconds. This is important to know, as you have to use it very strategically, and try not to use it whenever you take a bit of damage (around a quarter of your health), but rather try to use it when you are under half HP, or there’s a laser of some form attempting to lock onto you (they could one-shot you if you're anything under full health). Likewise, if you find yourself close enough or have the opportunity to move towards some enemies or even the enemy team’s Juggernaut, you can use the overdrive to try and flip them!

Expanding more on Team Juggernaut, avoid rushing towards the enemy Juggernaut, even if you have overdrive; the opposing Juggernaut’s overdrive can easily send you flying and can even make you self-destruct, forcing you to lose the Juggernaut and a point will be gained for the other team.

However, there are some strategic maneuvers that you can make to bring your team in the lead, or at least tie the score. Remembering that the Juggernaut's overdrive reloads only every 40 seconds (without the help of a Dictator’s overdrive or the nuclear energy dropbox), you can time your engagement based on when the enemy Juggernaut uses his/her overdrive. This is quite risky and may cause you to die, but if you find your team not engaging/playing for a draw, or you need to close the gap on the score quickly, you can perform this maneuver.

What you want to do is, as soon as the enemy Juggernaut uses their overdrive, check the percentage of your overdrive (or time it with seconds, but this is much harder) when their overdrive is gone check to time how much longer your overdrive will take to recharge, and how long you have until the opponent has a recharged overdrive again.

For example, if the opposing Juggernaut uses their overdrive when my overdrive is charged to 70% when I reach 100%, I know the opponent will only have 30%, as both overdrives recharge at the same speed. This is very useful to know so you can calculate if you are in danger of dying or not, then lock on to them for the full Striker salvo and finish them off with a few Railgun shots.

Lastly, the nuclear energy dropbox can be very useful. If you manage to take it right as the game starts (it spawns at around 6:40 left in the battle), you can charge towards the enemy Juggernaut without a care in the world, easily getting an early point for your team, then just retreat back to your base.

To conclude, mastering Terminator definitely takes a lot of practice, but don't beat yourself up if you find yourself constantly dying. Practice the tips and strategies I have mentioned above, play it safe until you find yourself more comfortable with the combo, and find the gameplay that suits you the best! Terminator is definitely worth learning, and you will have tons of success and fun with it once you master it.

Retrieved from "https://en.tankiwiki.com/index.php?title=Terminator_guide&oldid=39212"
REQUEST TO CUSTOMER SERVICE
We have recieved your request for our services and we will get in touch with you shortly.
Report a problem