From Tanki Online Wiki
see also: How to start

Controlling your tank is the most fundamental step one needs to pass through in their career. It can be said that it is one of the most influential moments of a player's career, as it plays a pivotal role in deciding their playing style later in the game. Now, let's take a look at the basic (default) controls, their customization, and the problems which occur in doing so. 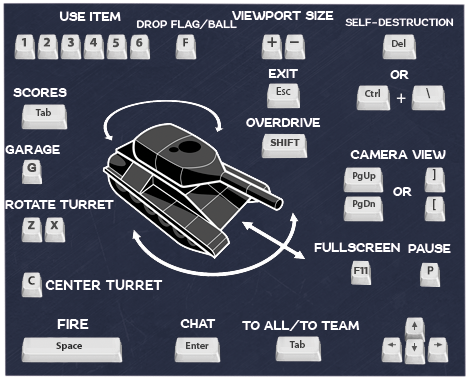 The effect of all supplies last for 30 seconds - aside from the Mine, which lasts until the player who placed the mine is destroyed, leaves the battle or another player activates the mine by driving over it (the only exception is the Miner which allows for a certain number of mines to survive after the owner dies); the Repair Kit, which instantly restores 1000 HP and reduces burning and freezing effects, and then additionally restores 3000 hit points over 3 seconds; and finally, the "Gold Box Supply", which works only as a trigger for dropping a Gold Box.

If you're facing problems such as a displaced/broken key on your keyboard, keyboard ghosting, or just because you play with another set of keys, you can customize your controls by defining a key to each action that happens in the game (on the desktop version only, of course). A very popular example of this is the Gold Box supply. The default button for using that supply was 6, but it was right next to the Speed Boost (4) and Mine (5) buttons. Hence, tankers would often mistakenly drop their valuable Gold Box supplies. This can easily be solved by altering controls, or in other words, customizing them.


To begin doing so, you need to head over to the Settings tab, which can be accessed by clicking on the

button, which is present on the right side of the multitasking bar.


Once you click on it, click on the 'Controls' tab, which will bring up a wide variety of control settings for the game. If you scroll below, you'll be able to see, access, and edit the default-set buttons to any button on your keyboard. You can do this by:

Note that you will be able to change these controls as many times as you like. Moreover, you can assign three buttons to each action. For example, the default button for dropping a flag is F, but you can also set Y and U to it, so that each time you press F, Y or U, the flag will drop.

Here's a list of the possible problems that can occur while you are changing the default controls:


While customizing controls, it may occur that you accidentally left a row empty. Now, there are three fields in which you can enter the buttons of your choice, but it is very important to have at least one field of every action filled with the button of your choice. If you leave the whole row for a specific action empty (e.g. Use Gold Box supply), the action you try to do in the game will not occur at all. For example, if I have no key assigned to use a Speed Boost, I will not be able to do so without assigning a key first.

If you mistakenly assign an already assigned key to a second action, the field for the original action will become empty and the field for the action you just assigned a key to will fill with the key you pressed. Reverting this is easy - just fill the empty field back up again and choose a new one for the second field.

Retrieved from "https://en.tankiwiki.com/index.php?title=Tank_controls&oldid=39648"
REQUEST TO CUSTOMER SERVICE
We have recieved your request for our services and we will get in touch with you shortly.
Report a problem