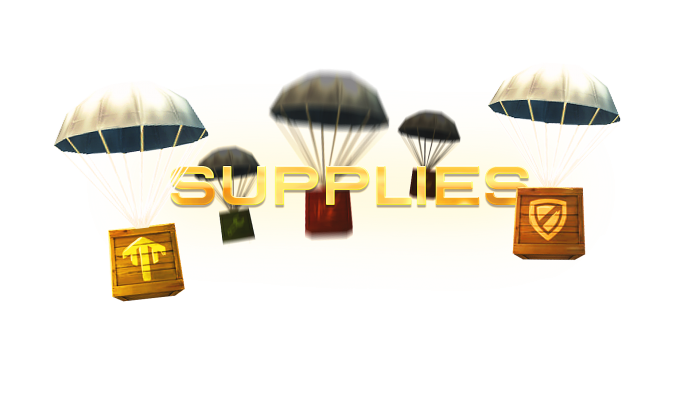 An absolute necessity on the battlefield. A kit of cleverly combined parts, carefully packed into a single plastic box, allowing you to quickly cover up holes in the armor and replace burned-out wires. The box is needed only to hold this wild array of tools, and, according to military experts can also be used as a bio-toilet.

A set of improved ceramic and kevlar armor plates, mounted in standard 600x800 mm slots. With a weight of 10 kg each, such an armor plate can double the protection of standard armor, allowing up to 50% of reduction in incoming kinetic and thermal energies of an explosion. Also included in the set are titanium bladed scissors, three rolls of double-sided duct tape, and a snow-white lace napkin, obviously irreplaceable in battle.

Unique military research and also a small metal clutch mounted on the middle part of the barrel with the help of two bolts and one screw. Allows increasing the speed of the fired round by several times, making it exactly twice as damaging. Unfortunately, an autonomous source of energy powering electromagnetic modulator inside the barrel will be discharged, quickly, and end the effect.

A real N2O gas-tank is a must-have for every tank. First of all, it’s the perfect fuel for a quick increase in speed for your battle machine, and, second, inhaling this substance will make your voice sound really funny. If you encounter strangely snickering tankers on the battlefield, know that they just puffed a large amount of N2O.

Mine is your friend. Mine is your comrade. Mine is your brother if you’ve seen more than one battle. To sneak, undetected, into enemy camp and mine it, to cover retreating teammates, to block all passages to your base -- all of this is possible only thanks to the deadly mines.

Maybe you’ve heard somewhere an ancient greeting uttered by an old clan of gold diggers - “Gold pls”. At one time, that request was for mods and admins, but also for regular tankers. Gold diggers would haunt the battles in search of Golds yet to drop, and the thirst for shiny boxes would dominate their minds, rendering them incapable of coherent speech and play.

One battery powers drone with energy for exactly one minute.

Branded AAA-battery for use in field drones. It was debated if more energy-efficient batteries could be used in drones, but the head of the project insisted on these elements. We speculate, that these batteries remind the head engineer of a child’s dream long lost, a remote-control toy car, which he might have lost, but actually never had.