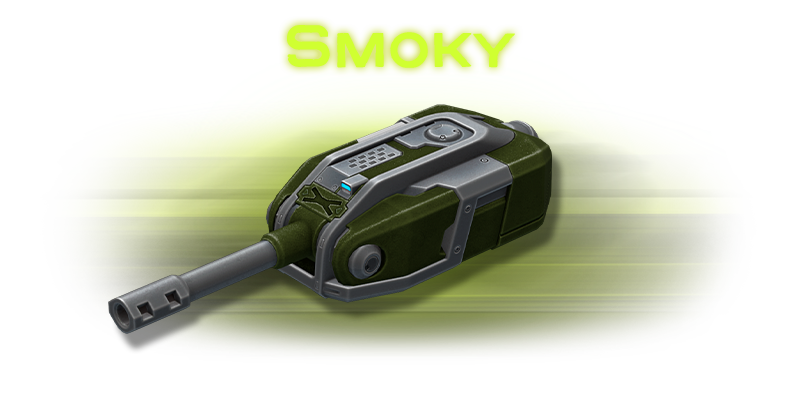 Every tanker owns one, even if it's just an Mk1 modification that can only excel at collecting dust in the Garage. The most comparable turret to those used on legitimate military vehicles, Smoky is your basic peashooter: tap the space bar, let off a shot, wait a moment to reload, rinse, repeat. Occasionally when firing, a shell impacting another tank will produce a cloud of sparks and electric discharge, indicating a 'critical hit' -- a shot that deals considerably more damage than a typical round would, and that stays fixed at a certain value. This means that a critical hit will not decrease in damage once past the maximum or minimum range. These occur primarily by chance but are known to function on a percentage-based gauge that fills with each shot hitting a target.

Legendary tank turret, made widely popular by how affordable and simple to maintain it is. Install it on a fast hull and slide between shocked enemies, as you destroy each unwieldy heavy tank one by one. It’s good to remember that damage of this turret drops depending on the distance from the target, and for such occasions payload of the turret has high-explosive rounds, effective at any distance. So far no mechanic has managed to load the rounds into the mechanism properly. Because of that, each time tanker fires a shot, it’s impossible to know which round will be used, but on the other hand tanker’s enemies won’t know either when a huge surprise hits them from far away.

Retrieved from "https://en.tankiwiki.com/index.php?title=Smoky&oldid=39883"
Category:
REQUEST TO CUSTOMER SERVICE
We have recieved your request for our services and we will get in touch with you shortly.
Report a problem