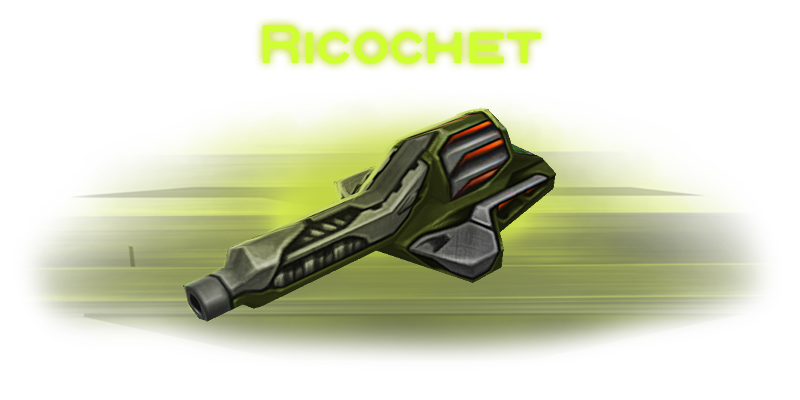 The border between mid and short-range, this turret proves effective in both small and medium maps alike. Ricochet, hence the name, uses projectiles encapsulated in a negative energy field, unlocking the unusual ability to rebound from surfaces. The second of the two plasma-based weapons, Twins being the first, this one has a notably slower fire rate and cannot be used indefinitely, requiring time to charge after expending a certain number of shells. However, in comparison to its sibling, Ricochet has faster moving projectiles, greater range, and the ability to attack foes indirectly from behind cover, so long as players are capable of accurate targeting. Ricochet is extremely effective in maps with many buildings and other perpendicular surfaces, maximizing rebound potential.


Plasmagun “Ricochet” is a new secret device created by top Siberian researchers. To mass-produce this turret, a team of 22 specialists worked for 3 years straight in an underground bunker without permission to see the sky. The final result is quite unique. This weapon fires plasma projectiles, coated with a “smart” minus-field. When hitting a tank the projectile will explode, but if it hits a solid obstacle it will bounce off and continue its flight. This way, using Ricochet you can hit targets even if you can’t see them. Unfortunately, it was impossible to solve the safety issue completely, and plasma rounds can easily bounce back and hit the tank that fired them in the first place. The “smart” minus-field is clever, but not clever enough to distinguish enemy tanks from the user.

Retrieved from "https://en.tankiwiki.com/index.php?title=Ricochet&oldid=39882"
Category:
REQUEST TO CUSTOMER SERVICE
We have recieved your request for our services and we will get in touch with you shortly.
Report a problem