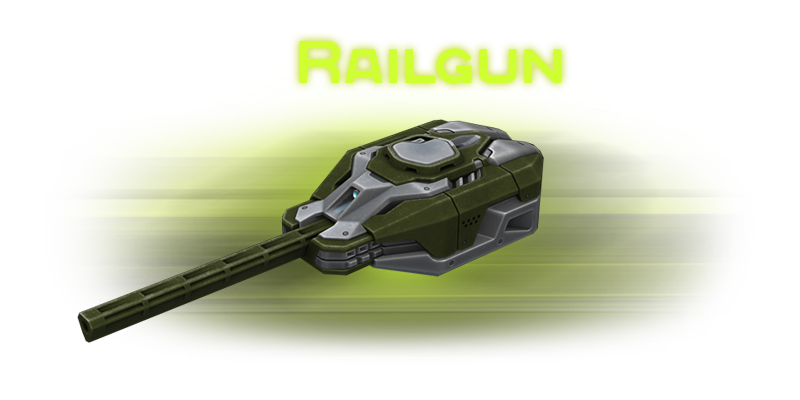 Railgun is truly a versatile gun. An excellent choice for both campers who prefer to kill enemies from cover at great distances and mid-fielders that are constantly on the move about the arena. Plenty of legacies revolve around Railgun, from its original name of Fear Machine (aptly named at the time, being incredibly overpowered) to its frequent use during the eSports era. Even today, most clans rely solely on Railgun, only deviating for the odd Smoky. The turret, while taking an exorbitant amount of time to load and a one-second delay after hitting the spacebar, is capable of doling out high amounts of damage at infinite range.

Long-range turret. It can fire through multiple tanks. Has a small firing delay.


If medium caliber turrets can no longer satisfy your thirst for creativity, then this toy is just perfect for you. A big caliber turret with a lightning-fast barrel speed and projectiles made from depleted uranium. Incredibly powerful and overwhelmingly precise kinetic projectile can make a hole in any tank, hitting several targets standing in the same line. Don’t forget that Railgun also takes a long time to reload and needs a short preparation before firing every shot. Ready-to-fire barrel will burn brighter than a holiday tree, which can be detected and used as an advantage by experienced enemies. The mastery of using this turret is similar to fencing: it’s as beautiful as it’s hard and unwieldy when you’re in a battle against other turrets designed for close range.

Retrieved from "https://en.tankiwiki.com/index.php?title=Railgun&oldid=40319"
Category:
REQUEST TO CUSTOMER SERVICE
We have recieved your request for our services and we will get in touch with you shortly.
Report a problem