Attention! It is currently impossible to directly join PRO Battles in the mobile version of the game.

PRO Battles are battles that have been created manually by the players. These are, more or less, custom battles with the ability to customize a variety of game mechanics, for example drones, micro-upgrades, and so on.

All PRO Battles which are live and available to you - provided that you are of an appropriate rank, are visible in the main lobby in the list of battles. Access the battle list by clicking the Battle List button in the Matchmaking interface. While this button is available only from the rank of

Warrant Officer 1, players as low as

First Sergeant can be invited by a friend to join a PRO battle.

Note: The Battle List button is at the bottom of the interface - you may need to scroll down to see it.

After the battle list opens, you can use the battle filter system located at the bottom to shuffle through battles of various game modes.

Attention! In PRO Battles, progression towards Daily Missions does not count! In order to complete them, you need to play in battles created by the Matchmaking System! Additionally, Stars cannot be earned in such battles either. 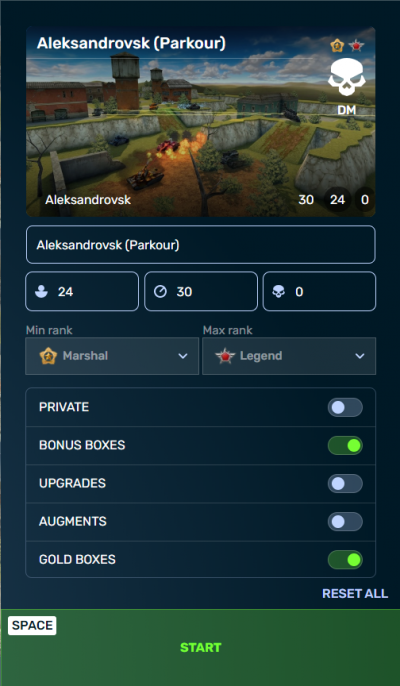 Here you can specify all the necessary characteristics of the battle: 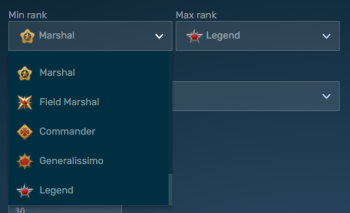 There are also a variety of customization options you can use for your battle, which are as follows:

You can change the overall format of the battle through this list: 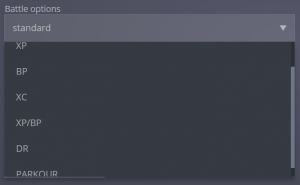 The last thing is optional, which is giving your battle a custom name. You can do this by typing it in the blank at the very top.

You are eligible to create any of the Matchmaking maps as PRO Battle. You can choose from 7 different game modes. 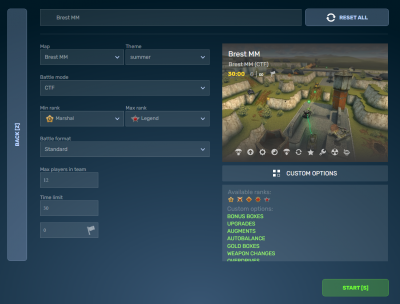 If you're unable to enter PRO Battles, it may be due to the following reasons:

In PRO Battles, the anti-powerlevelling mechanism is used to alter the number of points being awards. For example, if the speed of delivery of flags is too high, less points will be awarded to the player capturing them.

Upon self-destruction, you lose one kill and five points from your personal battle statistics. In TDM, your overall team's score will be lessened by one kill too.

Here's how the points mechanism works in different game modes, for example CTF and RGB:

Retrieved from "https://en.tankiwiki.com/index.php?title=PRO_Battles&oldid=37175"
Report a problem