Mines are very small but threatening object that deal 1500 damage, with a 1% chance to deal 3999 critical damage. They can aid in one's battlefield efforts, in tricky situations, or for trickier situations, when one wants to get a quick advantage over his or her opponents.

Ever since the implementation of mines in the first patches after the game’s release people have been using them to their advantage in simple base defense and tactical advancement. Some people, however, sometime in the undefined past, decided to take the art of laying mines to the next level. A new use for mines was developed – Active mine placement.

No one had ever supposed a device for defensive use could become a replacement for a high-damaging main gun in one’s assault maneuvers. Soon enough a few developed the required strategies and skills to use this potential of the mines, and tactical mining became a thing. Mining as we know it is now far more than creating massive minefields and waiting for “prey”.

Trick: Instead of using your mines as an explosive barricade for your base/safety den, you can use the game’s mine placement algorithm to directly shoot enemies below you while you are, for example, flying off a cliff.

Anyone who has experimented with placing mines near an edge must have noticed how the mine lands on the platform the tank is parked on as long as most of the hull is on the ground. If you drive your tank so that more than half of the hull sticks out from the edge, a mine dropped from your tank will land on the nearest surface underneath the center of the tank. If there is no such surface the mine will just fall into the abyss and be lost. Why, you ask, the center of the tank? The game engine that deals with the placement of mines works in such a manner that requires the center of the hull (with minor exceptions) to be on the surface for a mine to be dropped. This algorithm can easily be bypassed by driving the hull to the verge of tipping over the platform’s edge and then triggering the placement of the mine. The use of a high-recoil weapon is advised to avoid slipping down from the hill. Using this technique you can deal serious damage or even destroy whatever tanks are staying below your vantage point.

Learning this mechanic is very beneficial for just about every other mine placement trick you will perform. The peak-over-the-ledge trick is superbly effective, but there are other, more advanced and more risky ways of dealing massive damage to an enemy.

Let us take the ledge on the Blue team’s base in Silence, a classic example. There are various ways to apply the peak-over-the-ledge trick here as well, but many would prefer to try out something more drastic, more aggressive. The hill is a perfect place to perform speed jumps and as such the opportunity mustn’t be missed. Say that you are a light or medium hull rushing to the enemy team’s base to return a cap. The capper is protected by an escort you don’t have the time to deal with. And on top if it all you are using a short range gun, such as Isida, Freeze or Firebird. This is a great opportunity to try out the second most maneuvers that uses the damage of the mine to clear off enemies that block your way to the target. You can jump your tank off the hill, dropping a mine on the capper’s escort and safely continuing the chase. This strategy uses the same technique as the simpler peak-over-the-ledge one, but the difference is that you must calculate your tank’s position to the ground and press the “5” key precisely when you think you’re over the predicted position of your target. This maneuver is effective on just about any high platform, from Silence and Kungur to Esplanade and Fort Knox. 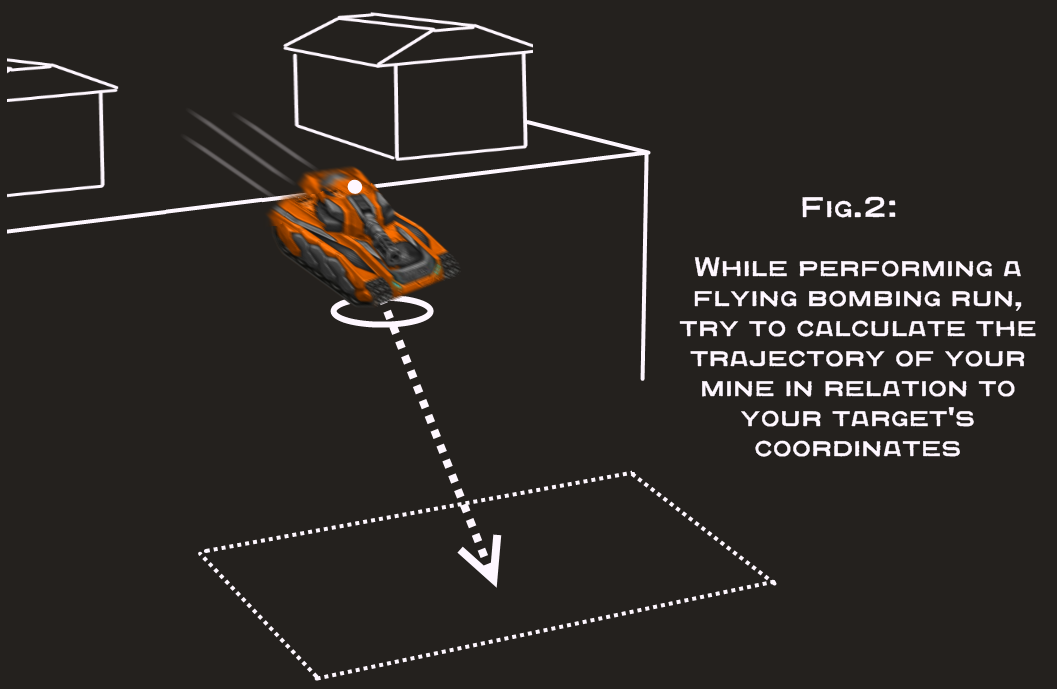 Much like a bomber plane’s bombardier you have to go through all these calculations, as well as to predict the one second arming period of the mine, but the result is fulfilling and spectacular.

Having learned how to use the mine placement mechanic you can use the controlled explosion of the Tanki online mine as a downwards shooting gun, a perfect replacement for instant damage (like Railgun and Shaft) on tanks that are equipped with short range weapons. Moreover, if you are using any other gun that has actual recoil (Ricochet, Smoky, Thunder, Railgun, Shaft) you can end up surprising your enemies by using two weapons in the same time, one having the approximate damage and reload of a Shaft mounted underneath the tank and another one in the conventional turret. This works on just about every hull with the exclusion of heavies like Mammoth and Titan, which need a nitrous pack to have the chance of performing the stunt without losing stability in the air.

Note
After the new physics update some of the tricks may become harder to execute or even impossible in the case of heavy hulls.
Retrieved from "https://en.tankiwiki.com/index.php?title=Mines&oldid=37103"
Report a problem