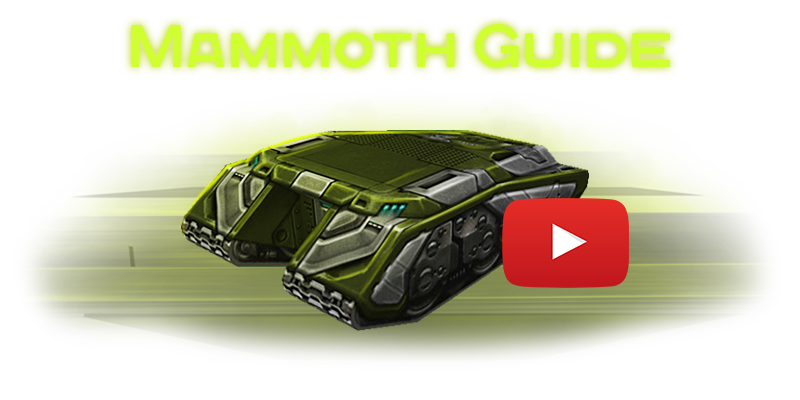 The most armored tank in the game. (apart from juggernaut)

Just by its look it evokes terror to other participants of the battle.

It’s practically impossible to kill a Mammoth which is using drugs.

Has an enormous amount of mass and power, making it very stable.

The lowest speed and maneuverability of all hulls in the garage.

What to do when using Mammoth

Mammoth, the second of the heavy hulls. Mammoth's overdrive is useful for capturing points in Capture points and getting Golds, Mammoths overdrive allows players to damage close enemies, and fully repair their tank while increasing the speed significantly.

Due to its inability to sneak up on enemies on most maps, it has become an unspoken rule amongst players in team matches that Mammoth + Short-range weapon = NO. Usually, players boasting this fortress on treads equip Thunder, Twins, Vulcan, or Shaft, but depending on the situation, other turrets can be used effectively, too. Mammoth is great when paired with Camper drone as the hull is relatively slow by itself and so it best with long-range turrets such as Shaft, Railgun, and possibly Ricochet. This drone allows the player to have full supplies if they can maintain maximum health, similarly, they can place mines around themselves or a point/flag in order to defend, making this drone very effective when defending with such Combo's.

Mammoth is the real king of DM and TDM matches. Thanks to its huge reserve of health, it can withstand attacks for a long period of time and inflict an immense amount of damage on multiple opponents. In CTF, it is usually used as the last defender, standing quite literally on top of its own flag; in CP, it is pretty much an unmoving turret mount. Mammoth's overdrive is also a great tool to kill the opposing team's Juggernaut or defending a flag.

- Mammoth was introduced to the game in Spring, 2010.
- Was a commonly favored hull in drug (supplies-enabled) battles.