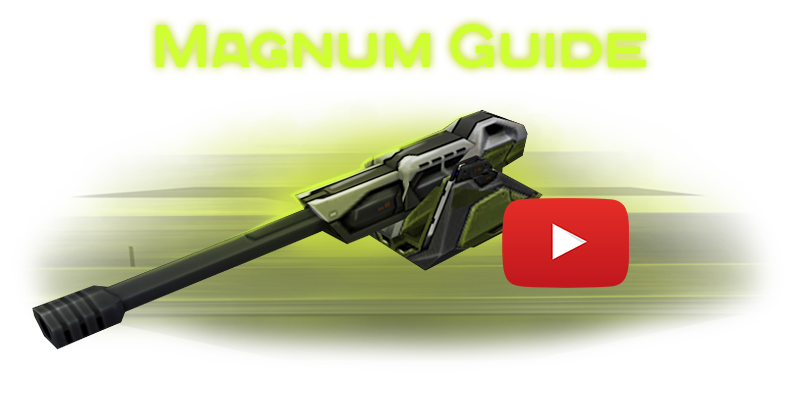 Magnum has one of the longest barrels in the game and is designed like a long-barrel howitzer. Magnum is the second turret ever to have an animation feature (barrel retracts when a shot is fired) along with Vulcan (spinning barrel). Magnum also has a somewhat transparent dotted trajectory that disappears a few seconds after your shot lands. It is the only way one can get a clue about where a Magnum's hideout is.

What to do when using Magnum

Magnum is a very powerful turret that can deal a lot of damage in quick succession, a fully Micro-upgraded magnum can shoot 2 shots in 2 seconds when the bar is fully held down, making it a great choice while using the booster drone to deal maximum amounts of damage to large areas and can kill the Juggernaut in ~3 shots!.

The hull you choose to pair with your Magnum is rather subjective and depends on what your preferences are. For those who wish to stay alive and dominate DM matches or camp out full CTF/CP matches, Mammoth and Titan are the go-to’s. They have large hitpoints but have negligible speed, which may be less than ideal for certain players. In saying that, Viking and Hunter have decent armour with significant speed. For those who enjoy chasing down flag carriers, Hornet makes a fair choice, with ideal speed and good weight. Similarly Magnum is quite a versatile turret it can be paired with heavy or light hulls, meaning it can be both used in defence and offence, this includes pairing magnum with a heavy hull and picking off the enemies from a distance or using magnum with Hornet/Viking to deal devastating amounts of damage

Magnum has a couple of drawbacks which prevent it from being an efficient attacking unit. These include the large splash, inability to rotate its turret and slow reload. However, these features are what makes Magnum unparalleled in defence. Magnum is generally best when paired with a bulky hull, especially in TDM and CTF where it can be quite effective if positioned correctly. Excelling in DM with Magnum can be particularly challenging due to the unpredictability of foes spawning nearby. A skilled Magnum player with the assistance of supplies can be quite scary though. Magnum strongly relies on a hefty hull so that it can stay alive for as long as possible, while capturing as many points within the nearby proximity and killing as many clusters of tanks as possible. 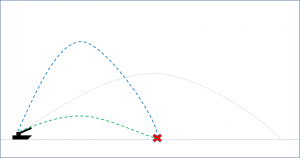 Magnum makes a fantastic defensive solo unit. Its titanic damage satisfyingly compensates for the slow reload. Magnum’s overwhelming splash and knockback can take out swarms of approaching enemies or individual attackers attempting to acrobatically capture a flag, if used correctly.

There are two variables that concern Magnum; angle and power. Magnum is automatically defaulted to fire at 10°, which is also a good angle for hitting short, powerful, flat shots. Anything under 10° at under 10% power is good for hitting foes who are hiding directly under your tank. 20-50° is generally good for hitting medium ranged shots whilst 55-70° would be most appropriate for long ranged shots. 75° or above are best for scaling high structures. Keep in mind that Magnum has two different ways to hit an enemy; with flat, powerful blasts or loopy, weaker shots (refer to image on the right). Note that these recommendations also depend on the position of your tank and on smaller variables, such as height of the hull or terrain of the map.

Magnum is most certainly not a basic turret. In reality, it's quite the contrary despite the noobish appearance and inability to rotate its turret. It takes good judgment and requires the user to estimate the required trajectory to hit enemies. Magnum’s splash damage is the biggest in the game and does serious damage. This can, however, be fatal if the user takes the brunt of the damage. Game awareness is critical. Ideal properties which strongly suit Magnum are: 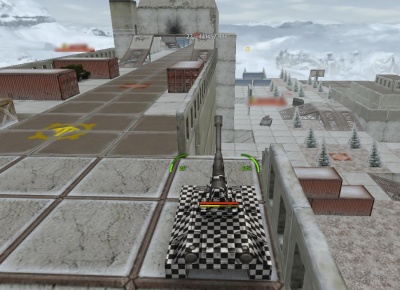 It is possible to scale tall structures by shooting at high angles (refer to the image on the right). This is fantastic because enemies will never see it coming and you’re safe, hiding a distance away from them. This feature can be capitalised on in maps which have multiple levels (such as Esplanade, Atra, Noise, Brest) or other maps which have high and low points (Chernobyl, Canyon, Factory for example).

Once you have successfully identified and claimed a useful vantage point, try to find areas where enemies tend to bunch up, either when trying to launch a big counter-attack or when trying to defend. A good example for this is in Aleksandrovsk, where the Blue base is often defended by clusters of Firebird or Freeze users. Make sure to find your target then keep shooting until you find the ideal angle. Guess the angle and adjust according to results. Once you get used to doing this, you’ll become a master at remembering trajectories in different scenarios.

“King of the Hill” Tactic

Finding a Governing, or a Vantage Point (defined above) can prove to be highly successful. These points are best when they offer protection from long distance foes, waiting for you to reveal part of your tank. Maps like Kolhoz and Berlin offer a splendid variety of great vantage points. If on a higher level (Brest or Silence for example), shooting with low power and a medium angle will make attacking light hulls easy pickings! Hitting from above is a smart idea, so long as that you are still shielded from enemy fire.

Tankers tend to run towards two things; flags and Gold Boxes! If your teammate has the enemy flag, you can rest assured that a bunch of faithful defenders will take the bait and come running to return their flag. This is where you can capitalise and get a nice amount of damage done whilst maintaining a safe distance.

It is pretty much common sense to go after a tank which either is of a relatively lower modification or is heavily damaged, unless situations compel you to do otherwise. However, this will, and should not be the case with Magnum. Magnum is like a real-life artillery cannon, designed to provide support for offensive campaigns. For instance, a Magnum should fire its shells at the enemy base instead of picking anyone around it. If the enemy team is running a two-pronged attack on your base, it's better if the Magnum opts for the faction that is using, say an uncommon entry point to the base or is advancing by tiptoeing through the flanks. The rest of the defenders can deal with the other faction.

Maximising the damage per shot is another thing. For example, when shooting at a clump of enemies, shooting at their centre of mass is useful. What if one of them is an Isida and you didn't see that from a distance? You injure both of them at one go. The same applies to multiple tanks converging or diverging from a spot. Shoot the spot, not the tanks. Direct hits are great but it's not a DM! However, the surroundings can make their presence felt, too. If one of the tanks is turning around a corner or going into a safe zone (for the chosen angle), a direct hit could be the optimum shot.

When you are at an altitude higher or lower than that of an opponent, rock your tank backwards or forth to aim your turret slightly up or down. You can do this by driving in one direction and suddenly braking or changing direction. This will tilt the front of your hull either upwards or downwards, depending on which direction you moved last. This allows you to aim your turret at a higher or lower angle for a very brief period of time before gravity pulls you level once more. Much practice is required before one can effectively use this technique. By rocking your tank, you can easily hit enemies hiding above you. Another option is to do the reverse by tilting your tank forwards to hit enemies passing underneath you, easy!

Another way to change the angle of aim for your turret is to make use of inclined surfaces. If your foe is above you, stay beneath the ramp, where they won’t be able to reach you and aim a weak upwards shot to surprise them. If you find yourself at the top of the ramp, adjust accordingly - maintain distance and shower them with a low power, downwards shot.

You will never be a great Magnum user if you don’t enjoy shooting steadily and landing shots right on top of enemies. So whatever you do, make sure you follow this one, final tactic:

For more information, refer to this Article written by Hexed for the Tanki Online Newspaper here.