From Tanki Online Wiki
see also: How to start and FAQ for beginners

Once you have logged in and the game has loaded, you'll enter what is called a lobby. At default, the lobby will have the Communicator (chat) button on the bottom right, and the news button near the bottom left. Near the top of the screen, you will see a large "Play" button to join a battle, or you can choose a specific mode or battle with the options in the smaller button next to it. This opens is the Battle interface, which will allow you to enter a battle in a mode of your choice with only a single click of the mouse, or to visit the battle list and join PRO Battles. 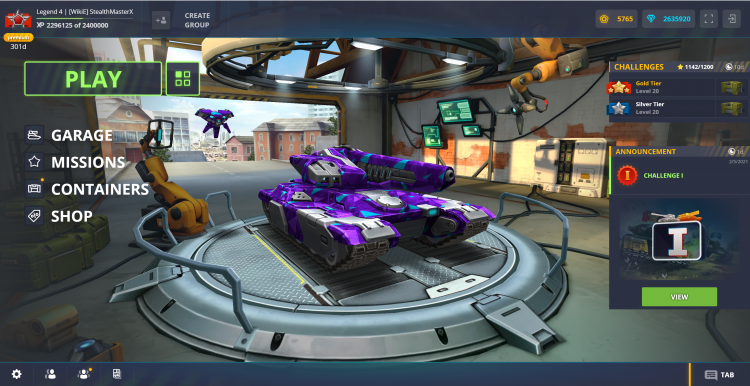 .
To return to the previous screen, press the Z key or click the button at the top-left of the screen.

The Communicator consists of three tabs in two locations:

This tab, which can be found along the bottom bar next to the friend's button, is where the important announcements from the game are stored. This can include any updates, Newspaper or social news, event and contest announcements, and last but not least, server update warnings.

This can be accessed with the button in the bottom right, and it is simply the tab that allows tankers to interact with other people through the use of the lobby chat.
In a recent update, the Chat tab was split into various group chats, namely:

Want to quickly see the clan chat but don't want to shift to the whole Clan button? This tab is made for doing just that. If you click on the Clan Chat tab, the chat of your in-game clan will open up, without the need of you completely "going inside" the clan using its original button.

Matchmaking refers to the process of distributing players into battles based on their rank and other factors, resulting in a fair match where players or teams have equal strength. The goal of the system is to allow players to quickly join battles and have fair and balanced games.

The Play button (for PRO battles) allows you to join a game. If it's disabled, the most likely reasons for this:

Retrieved from "https://en.tankiwiki.com/index.php?title=Lobby&oldid=36845"
Report a problem