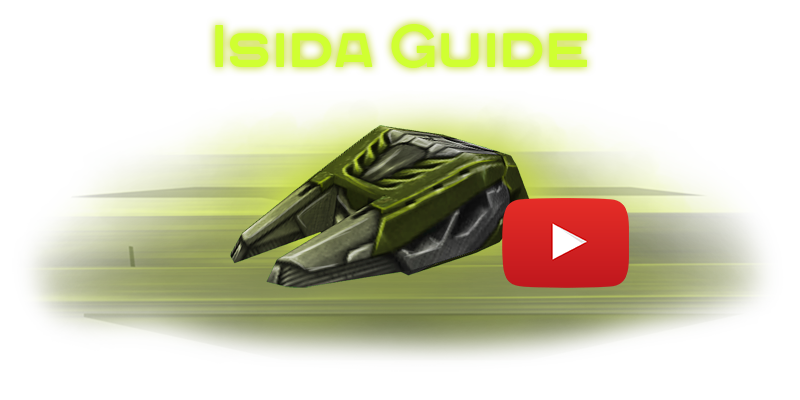 Isida, in a nutshell, is a unique weapon. It opens a variety of unique play styles to the user, but take note now lest you be disappointed in the future: Isida is not a pure offensive threat. Countless tankers haplessly wield this tool, ignoring the gravity of the responsibilities it requires and becoming more of a liability than an ally. This guide is made to diminish their number, and in their place, sprout responsible and capable users of Isida.

This guide covers tips on how to use Isida to its full potential, its strengths, and weaknesses, its functions with different combinations, strategies against different weapons, and we will even touch on its history.

The Amazing History of Isida

Isida first came out on September 28th, 2009. Since the beginning of Tanki, only Smoky, Firebird, Twins, and the Fear Machine (Railgun) were out, and Tanki knew that to increase their player base, a wider range of weapons and tanks were required. As a healing and damaging weapon, Isida significantly changed gameplay. Up to that point, the player pool consisted almost entirely of Dictator-Railgun at high ranks, due to their massive advantage against the “Tier-1” weapons and tanks. However, the introduction of Isida brought an entirely new facet to the game, being one of the only two methods of restoring a player's health in the game (the first obviously being a Repair Kit). Isida Mania didn't kick in immediately, however, since seasoned veterans still preferred to use Fear Machine instead. However, this new weapon made sure that Tanki Online's overall gameplay would never be the same again.

Isida's history is pockmarked with the scars of many past mechanical reorganizations. After it was first brought to the field, Isida sported several characteristics that may sound completely absurd at the moment – for example, it used to be able to self-repair itself without attacking an enemy. Just by holding the Spacebar down, you could slowly boost your health, even with nobody within range. This mechanic was removed two weeks later after developers realized the ability was incredibly overpowered, and not suited for Tanki's gameplay.

On December 30th, 2009, Isida was shifted from healing in “Percentage” to healing in “HP”. To put it simply, Isida formerly healed by "HP in comparison to the full life of the tank". Its points were given by the percentage of the tank it healed. Afterward, the points given to Isida were given by the amount of health they actually gave back. So, previously, healing a Wasp was easier to get points than a Mammoth. However, now, a Mammoth would give you lots more if it was low on health due to its higher health to heal, but it'd use up more of your fuel reserve.

Also, a fact you may not have known about Isida: the bringing of Isida into the game changed the supplied name from “Double Damage”, as it was called then, to the name of “Double Power”; since Isida could heal as well.

Another subsequent update also changed the point gathering abilities of Isida. Now, one only receives points once they let go of the spacebar, not simply after performing the repairs. Thus, if you are in the middle of healing and you suddenly perish, you do not receive any points, due to the fact you failed to let go of the spacebar.

In Fall 2016, another update cut down Isida to size, since its damage per second and vampire-like health suction abilities had reached obscene levels and popularity. Healing and damage were no longer equivalents, with the weapon's healing factor being overall decreased. This way, trains of Isidas could no longer stay alive indefinitely and ruin the balance of many TDM and CP matches.

Recently, in 2020 and 2021, Isida (no longer able to heal itself by attacking enemies) got buffs to its damage, allowing it to compete effectively with other short-range weapons once again. It has also received a number of augments that diversify and strengthen its gameplay capabilities.

What is it and what does it do?

Isida connects a beam of nanobots to one tank at melee range. It happens to have the highest damage per second, even compared to its two siblings, Firebird and Freeze (though it can only attack for 5 seconds before a 10 second reload). Its special effect is unlike any other, allowing it to repair a teammate's wounds, at a lower rate than damaging, but for extended periods of time.

Healing teammates with Isida gives experience points and battle score, scaled by how much you heal and rewarded when you release the spacebar.

Now that we know what isida does, it's worth pondering what to use it with. What is the best hull to accompany this weapon? All combinations with Isida can set itself upon are listed below in detail as a short overview of the best places to use each of the combos.

Wasp is great at chasing down enemies, but may find itself flipped or knocked around, and unable to right itself or attack. Hornet is a fantastic pairing with Isida, thanks to its stability and its Overdrive, which includes stripping nearby enemy armor and Supercharging the turret - an effect that lets you fully heal any teammate nearly instantly.

Good balance of mobility, stability, and strength, works all around for healing and atacking
Mediocre speed means you may have to take some extra time reaching the enemy base or chasing enemies.

The Stun and EMP of Hunter's overdrive are very helpful for a turret with such limited energy capacity, and the maneuverability of Hunter lets you dance around enemies. Crusader can make Isida a bit hard to aim at times, but its overdrive lets you take out distant enemies that would normally be unreachable with Isida. The the Supercharge of Dictator's overdrive turns Isida's healing abilities up to incredible levels, and sharing supplies with teammates complements its role as a support turret. However, its height can make it difficult to connect the beam. Viking is great at chasing down enemies, but may find itself knocked or spun around due to its low traction.

Generally, Isida is not paired with heavy hulls. Though they can be useful in some crowded or healing-heavy situations, generally mobility is preferred to strength as a pair for this turret.

The Strategic Tips to Isida Domination

Finally, we come to how to take out (or simply survive) enemies using other turrets! Here are some quick tips.

Against Firebird and Freeze

The strategy for these two turrets is essentially the same, as it involves taking advantage of a shared mechanic. Both of these turrets, unlike Isida, have damage that gets weaker at the outer ends of their range. Thus, if you stay as far from them as you can while continuing to deal damage, you will deal much more damage to them than they will to you.

Hammer's impact force is a problem: your aim will probably get knocked off thanks to Isida's small angle of a possible attack. If you still think you can take them, shoot at them between when they shoot at you, using the recovery from getting knocked back as a time to recharge your own weapon's energy.

Run. You probably won't even be able to get close enough to them if you try to take them head-on, and even if you do, their impact will stop your beam from connecting. The best thing to do is try to sneak up on them later from behind.

While approaching, try to move a bit unpredictably so that they miss a few shots. Once you're close enough, your job is basically done: Isida's DPS is far higher than Smoky's.

Against Thunder, Striker, or Gauss

Try to not reveal yourself to these enemies until you are fairly close - even if you can dodge a few shots or rockets, just one or two is enough to weaken you too much to be a threat up close. If you can get close unscathed, then press against their tank, forcing them to self damage themselves or not shoot you at all.

Try to not reveal yourself too early, and get close before attacking. Circle around the Vulcan, and its turret slowdown while firing will mostly prevent it from hitting you.

Usually, it's best to just ignore a magnum. If they're camping, a couple of mines and a well-placed shot will take you out after dealing just a bit of damage. If they're out and about, they probably know how to aim. If, however, they can't aim at you (especially if they can't turn their turret horizontally), just circle them very closely, and you can take them out. Getting super close can also lead to them overshooting or self-damaging.

The key here is to watch when their barrel is warming up, and change your movement pattern just then. If you can get them to miss just a shot or two, you can eat them for lunch. Also, don't give up firing just because you see a shot warming up - often those last couple of ticks are enough to kill them before their weapon discharges. As with hammer, if you're hit, briefly let go of the spacebar, using the time while you recover your aim to also recover some charge.

Wait for them to scope, and then approach them outside their field of view. They'll never see you coming.

For more information, check out the Pro's advice on Isida in the Tanki Online V-Log (do note that this is a bit out of date, so not all tips are relevant today). here.

Retrieved from "https://en.tankiwiki.com/index.php?title=Isida_guide&oldid=39093"
Category:
REQUEST TO CUSTOMER SERVICE
We have recieved your request for our services and we will get in touch with you shortly.
Report a problem