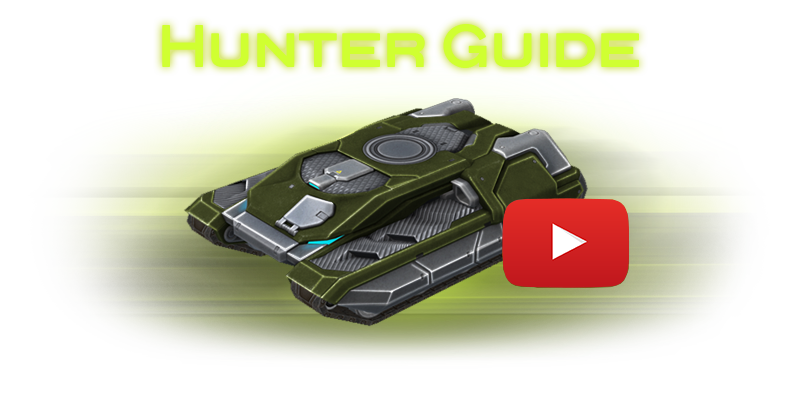 Has a good amount of speed and is armored enough to withstand the enemy fire for a decent period of time.

Having a medium size and height, it can actively use the architecture of the map for cover from enemy fire.

Hunter’s characteristics are too “medium” - sometimes a bit of health and speed is not enough. That’s why some players often prefer Hornet or Viking over Hunter.

What to do when using Hunter

Firstly, Hunter is a first-tier medium hull with the most maneuverability as to Viking and Dictator. Hunter's overdrive is great for closing in encounters and buying your team enough time to defend/attack. Hunter's overdrive can disable wasp's bomb and stun enemies making it a great defensive tool against most encounters, even versus Mammoths!.

With a medium hull, it’s more logical to equip mid-ranged turrets such as Twins, Ricochet, and Smoky. However, Hunter is suitable for all the other turrets as well. Firebird or Freeze; Isida is also a great counterpart when it comes to defending. When attacking/defending with Hunter players can use Freeze along with Hunter's overdrive to slow the enemies by jamming their overdrives and stun them for the maximum effect this should give the player/team enough time to secure the base or capture that flag.

Hunter is suitable for absolutely any game mode and map, because of its speed and survivability. The most suitable role of a player with Hunter is midfield, which will help the team both in attack and defense. In DM the best way of fighting is to constantly stay in motion on the map and to control the drop zones. Hunter can be used when defending and attacking making it very versatile, e.g Hunter's overdrive can be used to stop an enemy from taking the team's flag or destroying the team Juggernaut (as in giving the team more time to react) similarly Hunter's overdrive can be used to capture a flag in Assault/Capture the Flag where the base may be heavily defended, this being the case Hunter is best paired with close-range turrets that can deal bursts of damage up close.

- Hunter was in the game from its very beginning and was served as a hull with medium protection for inexperienced players.
- Now the modification MK1 is given to all Recruits at no cost, as opposed to Wasp MK1, which had been the traditional Recruit-level tank for the first 4 years of the game's existence. - Jammer was added to hunters overdrive on patch update #648 on the 28th of May 2021 as the first method of its presence in the game.