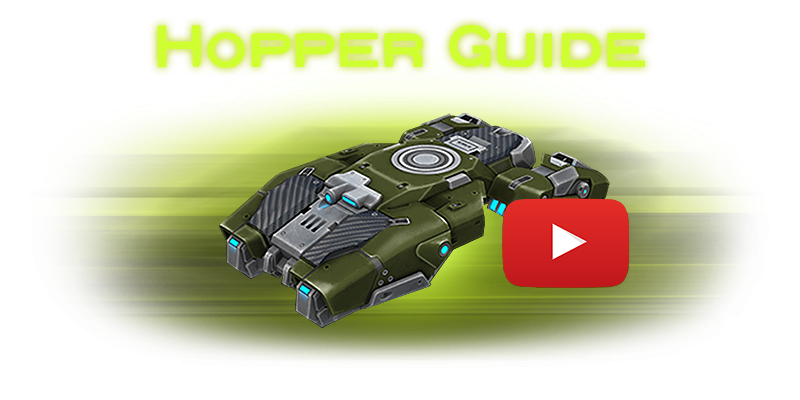 A guide to Hopper

Hopper is a light hull with a rather different playstyle and control system compared to its counterparts. This makes the hull a bit difficult to use for beginners, but once one masters the use of mouse controls, Hopper becomes a deadly weapon. In this guide, I will be giving you advice on how to get the best out of Hopper.

Hopper was officially released on September 19th, 2020. Similar to Ares before it, the new hull was first available only in an exclusive early access bundle that was purchasable for almost a week; players could not purchase Hopper in the Garage until three weeks later, on the 2nd of October.

Unlike the first hovering hull - Ares, Hopper was an instant hit with tankers. Players enjoyed the novel mechanics of this hull, but more than ever, the unique Overdrive it possessed. Catching Gold Boxes, climbing onto buildings and doing parkour had never been easier.

The first and most important thing I will tell you is to start utilizing mouse controls when using Hopper! One of the most useful abilities of this hull is the ability to move sideways. You cannot be blocked by enemies and can dodge shots easily.
In order to dodge shots, you need to stand in front of your enemy and start moving side ways while shooting him. Since Hopper is fast, it will be hard for them to hit you. This method is very effective against long and medium turrets turrets such as Railgun or Ricochet. However, it won't be as effective when faced with melee turrets, e.g. Firebird or Freeze.

An important thing to note is that Hopper's acceleration is low for a light hull: small dodging movements are possible, but it will be impossible to swing side to side by large amounts quickly. This low acceleration is also important to consider when anticipating corners and beginning a sprint.

Hopper has another unique ability - climbing! Yes, you heard me right. Hopper can climb walls and others objects as well.
In order to climb a wall or other prop, you need to first rotate so that your hull is perpendicular to the object. Next, move towards it by using either "A" or "D" keys, depending on which way your target is, simple as that! You'll notice yourself "climbing" in a few moments. This technique may take some time to learn, but it can be rewarding in some situations.

Hopper's Overdrive is considered by many players to be the best Overdrive in the game. When activated, it incapacitates nearby enemies, sets them on fire and causes your hull to leap up a considerable height.
In order to use Hopper's Overdrive effectively, save it for crucial moments - for example when the enemy team is stealing the flag, you can use your Overdrive and stun them. Another cool trick is to put a mine on your enemies while you are in the air as they cannot move when stunned.

Capture the Flag: CTF is an excellent mode choice for Hopper, you can use all the tricks I have mentioned above in order to gain an advantage. On top of those tricks, Hopper is light hull, which means it's very fast. You can capture flags with ease and making good your escape by utilizing the Overdrive.

Rugby: Rugby is by far the best mode for Hopper. Hopper's Overdrive can be used to get the ball while it is still in the air; Hopper's speed and strafing abilities make it easy to score goals.

Assault: Hopper also excels in ASL, (attacking team only). Similar tactics to those in CTF can be used; with the added bonus that all your enemies are likely to clustered around their base, making the Overdrive doubly useful for both capturing and destroying/incapacitating enemy tanks.

Hopper goes best with close and melee range turrets such as Freeze, Firebird, Hammer, Gauss, Smoky or even Striker. As a Hopper you will tend to be playing offence for most of the match, so plan accordingly.

Thank you for reading my guide, I hope you enjoyed it! For more information about Hopper, click on one of the images which can be found on top of this page.

Retrieved from "https://en.tankiwiki.com/index.php?title=Hopper_guide&oldid=38304"
Category:
REQUEST TO CUSTOMER SERVICE
We have recieved your request for our services and we will get in touch with you shortly.
Report a problem