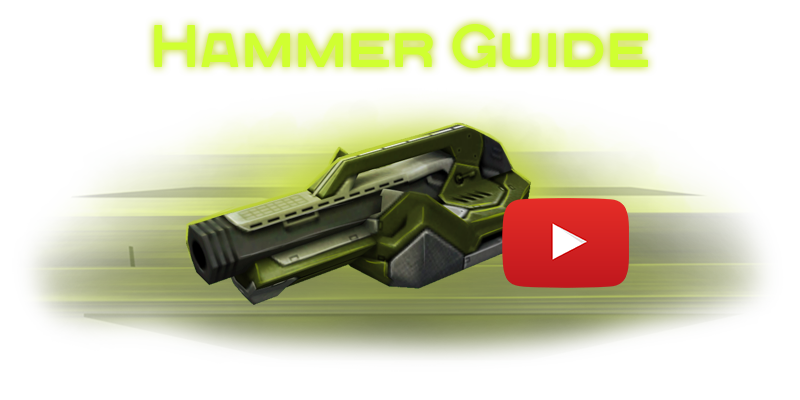 Hammer, introduced to the game on the 18th of December, 2014, was the first and currently the only shotgun-type weapon available. Hammer has a clip of 3 shots, after which the user must wait for it to reload. The reload time for the entire clip is roughly the same as the Railgun reload time, with each shot's damage dealing roughly the equivalent of Thunder's, and the reload interval per shot relative to Smoky's. Each individual shot is, in fact, multiple pellets, so the damage of each shot can vary greatly, depending on where you aim. The pellet spread also means that there's a fairly low chance of dealing notable damage to players at long ranges, and in combination with weak damage statistics rendering it even less effective at distances, the weapon is typically strictly used at close range.

The weapon was brought into Tanki Online close alongside Vulcan, to satisfy the long-held desires for new weapons which Tankers had gone on about for years.

In one of Tanki Online's famous V-LOGs, after giving Hammer enough time to settle down alongside other weapons after its release, Tanki announced that Hammer was the most popular turret for Tankers at Generalissimo level. Considering that the long-standing record had been held for Railgun for quite some time, this was fairly shocking news.

Of course, Hammer didn't just become popular due to its good looks. The title of one of the most universally effective and accepted combinations in the game goes to Viking / Hammer for a great number of reasons. Firstly, its high damage output per shot guarantees that with Boosted Damage, a point blank shot will utterly cripple a medium hull and kill a light one. This is an excellent testament to the sheer power of Hammer, making it ideal for Death Match for effortlessly spiriting away kills from injured opponents or even powering through groups of tanks themselves. High damage is also useful in Control Points and Team Deathmatch, simply for the benefit of removing other tankers from the field quickly. In fact, the Tanki World Records topic shows that the most kills in 30 minutes (328) was achieved using Viking / Hammer.

Viking / Hammer is also suitable for Capture The Flag. Its high impact force in conjunction with the fact that you can fire three shots in quick succession allows users to knock defenders out of the way, enabling them to steal the flag. Viking compliments Hammer exceptionally, as it has high health yet relatively good speed. With some finesse and a Speed Boost, Viking / Hammer has the potential to take flags and cart them back single-handed.

Wasp compliment's Hammer's rapid shot succession nicely, being able to swiftly race around heavier tanks and blow them to oblivion. With this vehicle in particular, Hammer is granted an element that Viking could only dream of - surprise. With enough speed, wasp can dart out from cover, hit an enemy, and dash off before facing retaliation.

Of course, Wasp's claim to fame comes from its unsurpassed effectiveness in Capture The Flag mode, and Hammer augments its effectiveness here as well as it does with Viking. At this point, though, you already have plenty of speed on your side, so more effort can be focused on Boosted Damage and Mines to flick away potential pursuers.

Do be careful with Wasp, though - it's likely to flip due to the high recoil if you shoot sideways or while in the air.

As noted earlier in the article, Hammer has a heavy impact force with all of the pellets making contact, making the gun useful for knocking tanks out of the way. This, equally, gives it a high recoil, tossing and rocking the hull beneath it with every shot. This recoil can be used for shooting one's self upwards onto other tanks. This ability is particularly useful when trying to catch a Gold Box that's been swarmed by a multitude of other tankers.

This trick is especially useful when the Gold box is falling on a flat piece of ground far away from ledges. As shown in the pictures, you can lean your tank back, and at the same time shoot. This will raise the front of your hull, allowing you to drive onto another tank (preferably Viking or Hornet, due to their low profile), giving you a height advantage to take the gold.

Thanks to their stability combined with high turning speed and ability to rock back and forth, Hornet and Hunter are excellent for using hammer in tight conditions, dynamic one-on-one battles, and across rough terrain. Once you get the hang of driving, either can be a formidable pairing, especially because of their overdrives - hornet's lets you land a couple of deadly critical shots (which deal full damage at any distance), and Hunter's overdrive is an excellent chance to let the clip reload and take out otherwise dangerous enemies.

Hammer is most in danger from tanks far away from it, due to its limited range. Railgun, Vulcan and Shaft from long distances can dominate Hammers with their infinite range and damage, putting Hammer in a tight spot in large maps such as Dusseldorf and Lost Temple. However, if there are places to hide available, one can simply keep out of their line of sight. The buildings in both of these arenas suit this purpose incredibly well. In general, a primarily long-ranged combination, such as Hunter/Railgun or Titan/Shaft, will lose should a Hammer user sneak close enough to hit them with full force. With high impact force and a rapid firing rate working in tandem, most long ranged fighters are toast in close ranged skirmishes with Hammer.

Smoky and Ricochet are the real nightmares for a Hammer player, however, as their respectable impact force and decent damage output pose a serious risk to hammer users by knocking off shots. As Smoky reloads quicker than Hammer, it can often shoot just before its adversary does, knocking off the Hammer's aim. If you're using Hammer and are required to go toe-to-toe with a Smoky, wait for them to shoot first, then turn your turret and fire at the corner of their tank. If anything, you've just prevented a critical hit from striking you, and you've dealt a significant amount of damage in return.

A general rule for Hammer users module-wise is to use types that support both Railgun and Smoky resistance, both of which are intimidating for their ability to attack from a distance and high, concentrated impact force, respectively. Shaft and Thunder are always welcomed into this category for the same reasons.

Before Hammer was introduced to Tanki, Parkour was mainly limited to high recoil weapons like Railgun and occasionally Smoky. When Hammer arrived, it had the same recoil and impact force, along with the ability to shoot 3 times in relatively quick succession. This, combined with the ricochet effect that later made it possible to impact yourself as well as use recoil, made it ultimately better than Railgun in terms of Parkour, leaving the old Fear Machine outclassed in most aspects, especially in solo parkour.

Another apparent benefit of Hammer is that it fires straight away; unlike Railgun, it does not need to charge up before firing, making solo Parkour worlds easier for the less experienced.

For more information, check out the Pro's advice on Hammer in the Tanki Online V-Log here.

Retrieved from "https://en.tankiwiki.com/index.php?title=Hammer_guide&oldid=39110"
Category:
REQUEST TO CUSTOMER SERVICE
We have recieved your request for our services and we will get in touch with you shortly.
Report a problem