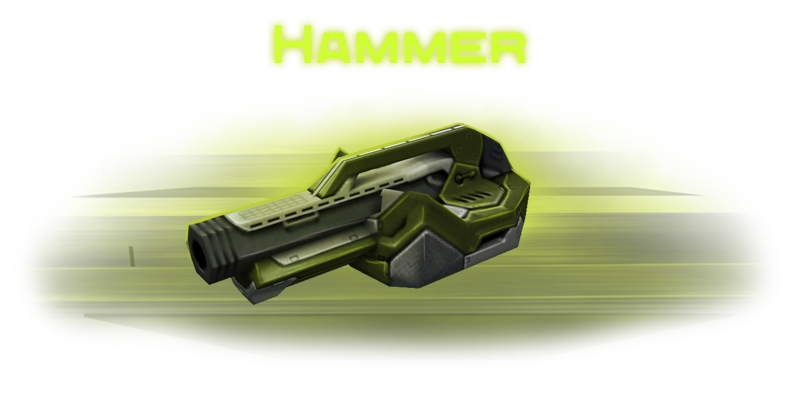 Hammer was the resulting turret when developers decided to mash together shotgun and tank characteristics. It is capable of using three shots with power equivalent to that of Thunder and the approximate reload speed of Smoky. However, this comes with a price: after the aforementioned three shots, the turret takes an extensive amount of time reloading, and each shot is only as effective as the number of pellets that impact the target (of which there is nine total). Hammer has the potential to dole out massive damage at close range, so long as the user has a decent aim. Bear in mind that the pellet spread discourages the use of this turret for long-ranged combat.

Close range turret. Uses shrapnel, which ricochets and damages several enemies at once. Has a round cylinder for three shots.
Engineers chose to use unorthodox methods to create this turret. Instead of armor-piercing shells, it uses a shrapnel projectile with tungsten arrows, and its reloading system is replaced with a robotic cylinder, not unlike a revolver. A final result is a reliable tool for nailing tanks into the ground. The only thing left is for the tanker to get close to the enemies, since the turret’s rounds are spreading too wide over long distances. The high density of its tungsten arrows allows the rounds to ricochet more than once. Usually, it’s enough to get the enemy hiding behind a corner or to kick off its aim by firing at the enemy from the side. Alternatively, you can also ricochet the shot back into yourself.

Hammer's Prototype
Retrieved from "https://en.tankiwiki.com/index.php?title=Hammer&oldid=40323"
Category:
REQUEST TO CUSTOMER SERVICE
We have recieved your request for our services and we will get in touch with you shortly.
Report a problem