Guide to playing in Year 2042 effectively 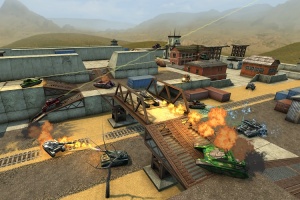 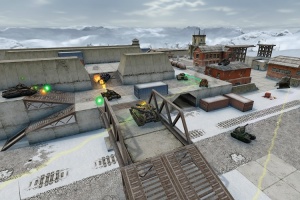 Overview: Year 2042 is a rare map, but is very popular among parkour entusiasts and even more popular at low ranks. It can be easily found at the bottom among the servers. Year 2042 is available to players who hold the rank of First Sergeant and higher in the rank structure, though most don't see this map outside of Warrant Officer 5.
Battle Modes: DM, TDM, CTF, CP
Size: 24 players, 12vs12

Year 2042 is considered as one of the largest maps in Tanki Online after Lost Temple, Berlin and Dusseldorf. Although Hammer and the like are somewhat useful under the cramped environment, it’s better to equip a long range turret such as Railgun, Thunder, Vulcan or Smoky. In DM, you're typically better off staying inside the tunnel and constantly peeking out from behind objects and firing to kill enemies, should you pick a mid- or long-ranged weapon. Once you have locked onto your target, follow it until you succeed in eliminating them and then return to the tunnel or anywhere else with ample cover. It is better to use Thunder or Ricochet if you are going to occupy the tunnel permanently, however, since both of these weapons can attack indirectly through splash radius damage or bouncing projectiles.

Besides the tunnel, there are many other places to camp and deal damage. The area beneath the bridge in the red base (behind the boxes) and the area beneath the big platform serves protection from at least three sides so you can focus on one. In TDM, the best turret for camping in such a location would be either Railgun or Thunder, depending on the position you are camping in. Shaft doesn't fare particularly well due to the map being too cluttered with objects, impeding view and range effectiveness, but a few of the longer hallways can serve this sniping tool well. The red team is generally better for TDM, since it has the most camping spots. An acceptable tactic for clearing out opponents in TDM mode would be to send a close-ranged fighter through a tunnel or some other concealed path first, let them unleash utter bedlam, and have a Smoky or Ricochet follow through and finish off weakened opponents. Firebird functions well as a lead, sporting the highest dps (damage per second) rating in the game, but Freeze can be used tactfully to injure opponents and inhibit their attacking abilities long enough for the following tanks to finish off.

Additionally, I highly suggest using Striker here. Remember, you don't have to use the salvo by locking onto someone. Just keep firing your rockets one-by-one and you'll definitely amass a great number of kills in no time. Why? Because, first of all, protections against Striker are scarce, and not many people know how to dodge it's rockets. If you want to use Magnum, camp next to the wall in between the map and keep raining lead on the other side.

As previously mentioned, you can apply the same principles in CTF as in DM/TDM. In regard to the high player density of the map, it’s obscenely hard to enter the enemy base, let alone capture a flag - provided that the enemy has a strong defense. For both teams, the optimal defense should consist of three tanks: A Mammoth / Smoky or a Titan / Vulcan sitting on the flag for suppressing fire and onslaught stall, a Viking / Isida behind it to both keep the stall alive and give chase to players that managed to slip away with the flag, and a Hunter / Freeze at any point near the flag to further slow down opposition. It is recommended to have more than one or two Isidas in all team battles, simply due to their unique assets and variable roles they can fill if necessary.

As for attacking, try to sneak into the opposing base using the various tunnels or taking a long drive around the perimeter of the map. A solid attack strategy should consist of three prongs, taking various routes to meet in the center. Two players will focus on wreaking as much havoc as possible, while the third will use the chaos as cover to swipe the flag and make a break for it. Organizing a small, mixed profile team to assault an opposing stronghold will end with varying levels of success, depending on the opponents in play and your other allies.

Another strategy is to utilize Magnum and camp near the middle wall. This strategy gives you protection - because you're in your base - and cover. Meanwhile, you'll just have to shoot over the wall into the enemy base.

The tactics for Control Points follow the same golden standard: get to the point, try to hold it for as long as possible, rinse, repeat. There are five Control Points in Year 2042, with three to the west that are all quite close to each other, but not directly in the same line of fire. Another is on the raised platform next to the blue flag and the last one is under the same platform, down a grassy slope. Down here you will find an entrance to a small tunnel that takes you to the west near the middle of the three CPs. That being said, it is better to make use of tunnel as long as you can. The map's design has some favor towards the blue team, considering the distance traveled for both teams are not congruent, the red alliance having more ground to cover and more roads to traverse before reaching areas of high-point density., since it has to travel longer to control the points than the blue team. A Striker/Titan-Vulcan with a pocket Isida sitting on the highest ramp will allow one team to dominate over that entire region. Try to cut off areas by deploying mines; at worst, it'll rip chunks out of heavier hulls, making for an easier time handling them. 120 - 240 damage is nothing to scoff at.