Guide to playing in Valley effectively 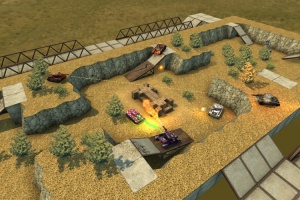 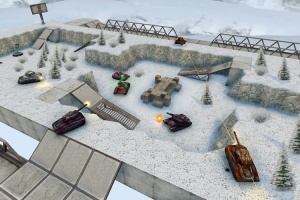 Overview: Valley is a small-medium map and a very rare one, which can’t be easily found among the servers. In fact, you might be lucky if you spot one!

The best weapons to use on this map are bar-none Striker, Thunder, Smoky and Firebird. As Valley is a small-medium map, using small or medium-range turrets is suggested. Although Ricochet is a viable mid-ranged option, it has no advantages over other weapons due to the walls of the stage not being perpendicular to the ground, making the rebounding effect of Ricochet's projectiles practically useless. Try to stay near the bridges, using the protective railings as minimal but occasionally effective cover. Not only can they save you from weapons with a low firing rate from the right angle, but it's surprisingly easy to fire back from the same location with a weapon of equal range and caliber. Titan and Mammoth are excellent options for the center of the valley, and with a Double Armor and Double Power, you can rip players to shreds while they're spawning. A position on the cliffs will serve you well, especially with a medium hull like Viking or Dictator, the former having a lower profile for opponents to try and strike, while the latter sports a better vantage point to fire from, hitting opponents in areas where they believed safety could be found. Take control of this area and the Repair kit that drops, as it'll extend your lifespan dramatically if you can keep everyone else pinned in the pit.

The trick to capturing flags in Valley is the use of the bridges on either sides. The optimal defensive positions should include a Vulcan, Smoky / Thunder, and a pocket Isida for when enemies begin whittling away at their defenses. Heavy or medium hulls are recommended, depending on who wants to try mid-fielding as well. (Smoky is an excellent applicant for this position.) Taking a vantage point on the cliff above is great for taking down players before they become a problem on the front lines; Railgun and Shaft have niche roles here, chipping away points and rendering assailants weaker before they reach the flag, making the final line of defense's job worlds easier.

For offensive measures, Striker, Hammer, Thunder and Twins equipped with anything between the range of Wasp and Viking should do the trick, depending on which route you decide to take to access the flag. An Isida will definitely make the task more manageable, but due to the low player count, it may have to divide loyalties between both the offensive and defensive fronts. Use one of the bridges to sneak into the enemy base if you're a lighter hull, then jump on the flag and return through the central path if it isn't entirely barricaded by giant such as Titan. An Isida should be waiting for the flag-bearer in the middle, also ready to pick up the flag should the holder perish before it can reach them. Passing the flag to a heavier hull is critical, as a Magnum, Railgun, Shaft or Thunder can transform a lighter hull into a fireball before they make it halfway across the map.

There are 3 points in Valley. Points A and C are in the either corners and point B is in the middle. Upon start, points A and C will be captured by each team respectively, leaving point B to be contested. As usual, the point will go to whomever is more capable on the field with their damage and armor. Modules are useful here, especially those of the Badger and Shark families; Vulcan and Firebird are common contenders of the CP realm, and should be treated with caution. The errant Shaft is also capable of cleaning house on point B, keeping players of the opposing team from flocking over it in plain sight.