Guide to playing in Subway effectively 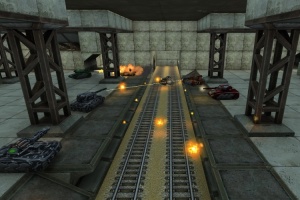 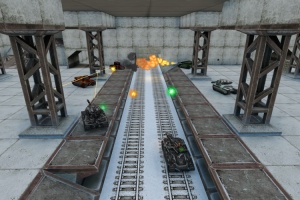 Overview: Subway is one of the rarer seen maps in Tanki Online. Although not extensively played, Subway offers a fast-paced gameplay that will surely keep you on the edge of your seat.

Subway is essentially divided into two sections: the ground-level platform, allowing medium-range weapon clashes, and the subway-level, where the short range action takes place. In a Subway DM, your best choice would definitely be a high firing-rate turret, mounted on a hull like Viking or Titan. Viking allows you to be mobile and sneak up on opponents and quickly steal kills. Due to Firebird’s fast firing-rate and high damage rate, it makes a brilliant choice for Subway DM. Twins, Hammer, Ricochet or Smoky are also very good choices if playing on ground-level. Ricochet grants the ability to easily inflict damage on people below you and its fast firing rate is also quite handy and if you use the auto-aim of Ricochet to its best, it can be lethal. Smoky allows you to play in any part of the map and easily inflict damage and steal kills. Railgun comes in handy in TDM, as a brilliant choice for sniping. It is best to remain behind cover and quickly destroy incoming enemies. Titan comes in handy when playing at the underground subway level, as it bestows mountains of health to work with.

In CTF mode, both flags are positioned slightly below ground level, the underground subway section being where sneaky attackers can slip through and steal flags. Shafts may be useful if positioned near an Isida, to pick off attackers going for the flag. A Titan / Ricochet would be perfect to sit on the flag as it will allow you to fire projectiles to people trying to through the underpass and its brilliant knockback can make incoming attackers unstable, especially if they are using a light hull. A Vulcan next to the defender sitting on the flag will almost ensure you a very solid defence, as Vulcan prevents defenders coming from below, assisting the Ricochet. Its knockback can also likewise slow down opponents. Be careful as attackers can jump on top of the Titans and Mammoths sitting on the flag using the window above.

The best way to attack is to follow the outer edges of the map and jumping on top the enemy flag using the window. This will allow you to take the flag without the need of pushing the defenders. A good turret for this role would be Smoky or Hammer, the likes of which can knock off snipers’ aim. Taking the flag from above the defender is useful as it means that the defender sitting on the flag will be caught by surprise and won’t be able to retaliate. Your goal is to simply take as minimal damage as possible (and also to not get flipped), so that you will be able to run away without getting damaged severely. A great module for this position would be from the Griffon family, allowing you to take a fair amount of shots from Railgun and Thunder (especially with a Double Damage) without dying and needing to repair. It can also prevent you from being easily picked off by Shafts.

There are 5 control points in Subway. Point B in the middle and points A, C, D and E in the corners. All of them are at ground-level, so all the action is going to take place at point B. At spawn, points A, C, D and E will go to either teams, leaving point B contested. At this point, the team with the heavier hulls and the most Isidas will definitely capture. Titan is your best choice for a Subway CP. Although all turrets can be used, Vulcan and Smoky tend to be the most effective.