Guide to playing in Station effectively 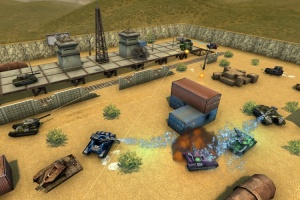 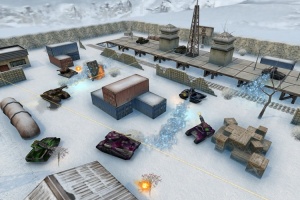 Overview: Station is a rather quaint and a distinct map, with a variety of props. It makes for a great gameplay and is normally found with supplies off.
Battle Modes: DM, TDM, CTF, CP
Size: 16 players, 8v8

Station is one of the most cramped medium maps in Tanki. There are so many props that driving with faster hulls can be a bit of a problem, especially with Hornet and Hunter, since both of them tend to skid. Using Titan or Mammoth, paired up with Smoky, Firebird, Ricochet or Vulcan. All these weapons work beautifully with a heavy hull and can ensure you a sweet, glamorous victory. Don’t just sit in the middle, though, as this is a sure-fire way to be sent home in a box; hide under the station, sit in the corners, mine the entrances and only come out if you are sure you can one-shot someone. As for Gold boxes, change to Firebird and [[Titan]. Then instead of going for the Gold box, kill everyone when they pile up. There is a good chance everyone will die and you will be left and simultaneously, and you’ll have a chance to rock a couple of easy kills. This is because the battle fund tends to be overall higher in Station in comparison to other maps, thanks to close quarter combat meaning kills will be climbing higher than ever.

The key to winning a Station CTF (or any CTF, for the matter) is coordiantion of assault and pushing the boundaries of your team's side of the map. It’s recommended to have a few stalwart supports defending you while you are trying to capture the flag. Two Isida with Hornet will do the trick, or if you want to take a more offensive approach, a few Thunder or Smoky can rip apart enemy teams. Having a Mammoth / Ricochet camping on the team’s flag is a decent method of defending the flag. You can drive a defender’s attention by shooting at him, and meanwhile, your teammate can take the flag and capture it.

There are 3 points - Point A, B and C. Point A is in the middle of the train station beside the two towers; B is in the middle and C is located next to the blue base. All points will be contested upon spawn since the spawns are generally spaced throughout the map. The trick to capturing them is to have at most three Isidas - one for each point. Heavy hulls paired up with high-damage weapons such as Firebird, Smoky, Thunder and Twins will make the job easier. Each of these heavy hulls needs to simply sit on the point with an Isida healing them. As for attacking and making the enemy stay in their own base, using Railgun or Thunder with Viking can lead to desirable results. Viking's speed, health and turning radius with Railgun or Thunders high-end damage will make sure the enemy gets torn to pieces should they blindly advance.