Guide to playing in Stadium effectively

Overview: Stadium used to be a very popular map, known for its super predictable Gold Box drop zones, epic battles and high funds. It is not as popular for playing now but has adapted into a real Stadium. It is used for a lot of mini games such as Shooting Range and Labyrinth. It is also often used as a canvas for creative tankers to show off their "mine art".
Battle Modes: DM, TDM, CTF, CP, RGB.
Size: 10v10, 20 Players

Stadium is the perfect map for Shafts. Well, it’s the only map for Shafts. There are generally a lot of campers in Stadium as it is set up perfectly for it. There are a few great spots where you have a great view of the map and can go pretty well unnoticed. You will want to pick one that isn’t used by others in your team so you stay “under the radar”.

This tactic is much harder to use effectively as it requires you to be as unpredictable and sneaky as possible, which is hard in a very open map. This tactic works well in any part of Stadium, from the close combat side (Bases) to the slightly more open side (Centre).

The key to pulling off this tactic effectively in the enemies base is to always try to attack your target from behind, beside or under him and keep out of your targets other enemies sights, which shouldn’t be too hard considering there will be a lot of Shafts in the other team. You will need to be moving almost always as that makes you a harder target to hit, especially for Shafts and Railguns at extremely close range.

You will need to try and finish off your enemies very quickly as there will be camper teammates waiting to steal your kill. The best combos for this would be Firebird and Hammer, as they are extremely high damage turrets.

Freeze is also a notably good turrets to use in this tactic - with it you can sneak up behind enemy Shafts or other low-rotation speed turrets and immobilize them with the freezing effect.

Defending in Stadium is easy if done correctly. It is very easy to stop an attack is you pick the right equipment and spots. Camping is a great way to defend in CTF, but you will need to know where to go and what to do there.

Attacking in Stadium is all about speed and agility as it is so open. It is near impossible to attack with anything heavier than Viking. You will be exposed to enemy snipers for short distances while trying to get to their base or capture the flag, so you need to get through these areas as quickly as possible. When capturing a flag, there is the quick route and the secure route. 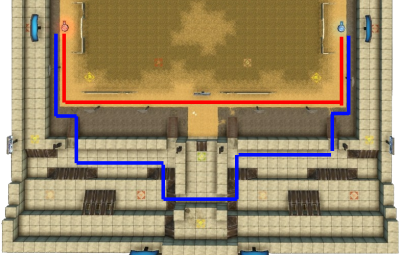 Quick Route: Used when the enemy team is weak or there aren’t many snipers. This way has more time being exposed and generally there isn’t many teammates around you.


Secure Route: Used when the enemy team is very strong and there are many good, active snipers. This way has less exposed time, more secure places to hold the flag and more teammates to help you.

When returning the flag, never go up the sides. It is extremely exposed and you are a very easy target for a Shaft or Railgun. Try zipping around the flag bases or going straight through the middle. You will have to try and get 2-3 tankers going at once and preferably from different directions.

The tactics for Control Points are the same as always, rush to the point and try hold it for as long as possible. As all 3 points are in the middle of the map, heavy hulls will be too slow to get there. Although, a Mammoth/Titan with Shaft holding back is a good idea to help the attackers by quickly killing the pesky Wasps and Hornets. The most effective hulls would be Hunter, because it has insane pushing power and good health to speed ratio, Viking, because it is incredibly stable and has an awesome health to speed ratio, and Hornet, because of its great speed, manoeuvrability and its decent amount of health.


The turrets to use depend on what you are trying to do. If you plan to go and try stealing a point out of the enemies control, Firebird is the way to go. It has incredibly high damage, can damage multiple enemies at once and even if you die, the after burn can still take out the remaining enemies so you team can get in and steal the point. Hammer is also good if there aren’t many enemies around the point, especially if they are using light hulls or have already been damaged. If you plan to hold back and wipe them off the point from a range then attack then Smoky, Vulcan and Thunder are the way to go. Their max effective firing range is quite long so there is no need to worry about your shots not doing as much damage as they could be. If there are multiple tankers trying to clear a point, try spread out so they struggle to clear you all quickly. An Isida always comes in handy, especially while trying to take control of a point, so don’t be afraid to ask someone to take Isida, it could be the difference between winning and losing a close match.