Guide to playing in Skyscrapers effectively

Overview: Skyscrapers is quite a big map - and what's more is that it is situated on top of high-rising skyscrapers, hence its name. Majority of its areas have little or no cover at all, while almost all ramps are very thin and have dangerous turns next to ramps, making it one of the maps with the most difficult terrain. Expect campers, Shaft and the like at every corner, and don't forget, watch out for mines!

Skyscrapers was initially called Abyss, but that changed on June 3rd, 2014.

Skyscrapers is the perfect map if you're a heavy camper. Shafts, Railguns, Magnum and other sniping turrets thrive here, and that is mostly due to two big reasons:

For instance, the ideal camping spot would be on top of the skyscraper, located in the blue base with something strong such as Shaft/Titan or Magnum/Viking equipped. If you plan on going there, make sure to have a lot of mines in hand, as you'll need to block off the ramp leading to your position by planting mines - which will make sure no one sneaks up on you while you're busy shooting other people.

Other camping spots include the corners of the map, which are almost never driven upon and provide a lot of cover. However, you'll need to be careful of falling down from these areas, as most of these are built upon on only a single row of props.

This is a tactic where you, with the right equipment, have to predict which enemies you should aim for. This works almost perfectly in Skyscrapers. First up, you'll need to choose the right equipment. I'd suggest using something both versatile and deadly, like Twins/Viking or Ricochet/Hunter. Then, jump down to one of the lower ramps in the middle, and shoot anyone who crosses over you. If people stop coming from there, simply change your position, but do this quietly!

In a TDM, the biggest objective is to kill without getting killed. This means that there should be enough Isidas in your team to fill up even the slightest of lost health. Most people tend to go all out in this format, trying to end the game as early and quickly as possible; but that doesn't work all the time. You need three basic things to win a Skyscrapers TDM: cover, bigger damage output than the enemy and Isidas. Although, as in DM, it is suggested to use one of more efficient equipment. The best tactic here is to grab a long range turret, equip a Double Damage and shoot anyone who crosses your path!

Defending your base in Skyscrapers is one of the easier tasks to do. There are only three most popular ways to defend a base in this map:

Nevertheless, here is an illustration of where your defenders should be placed ideally. The faded areas show where most defenders are operating, while the dots are the places in which at least one defender should be present. Note that darker spots refer to people using a heavy combination (Shaft/Titan, Magnum/Mammoth), while on the other hand, lighter spots could be places filled in by temporary defenders. 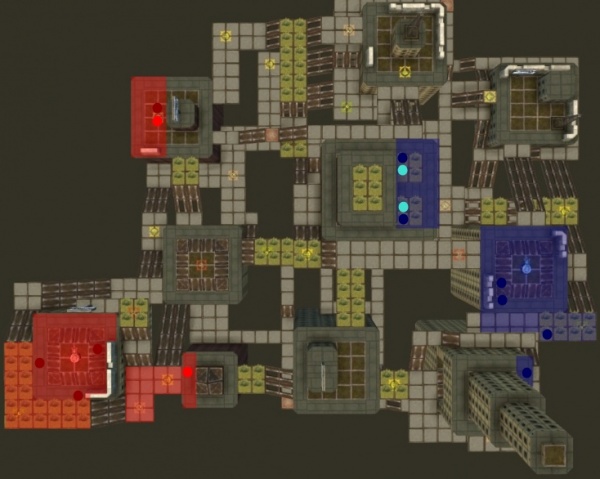 Attacking in this map can be a bit tricky - and red side may be harder than on the opposite side. To do well and bring the win for your team, attackers have to play harder than the defense of the enemies. Though possible, if attack lacks in its powerfulness, it mostly means that enemies will start attacking harder and players on your team may have to change their roles which leads to a defeat. To avoid it all, a solution comes from planning attacks, routes and right timings (when snipers are reloading, go!). While under the support of offensive defenders and supporters, an attacker can start influencing to bring the flag for the safe capture. Well suited attacker should have a fast and healthy hull with a mid-to-long-range turret.

Here is a map of suggested routes for planning attacks in Skyscrapers: 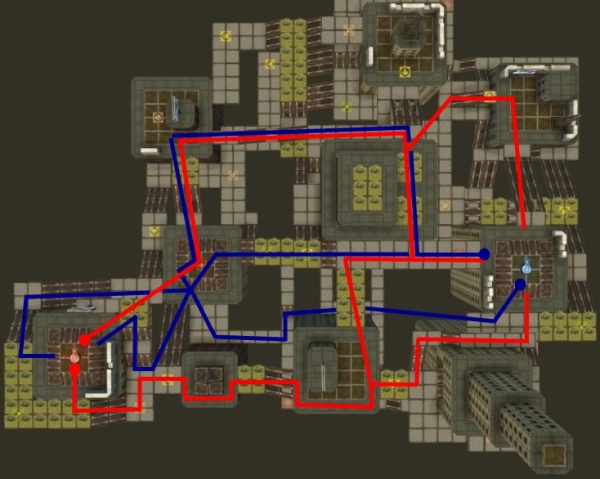 To get a successful win in Skyscrapers CP, a team has to hold a total of five points - which are themselves spread over the huge map.

Talking about tactics - it is often suggested to capture the point closest to the base, so it is not wrong if your team does so. One player on the team (the closest one to the point) should capture the point in your base and stay there to defend it. As points A, B and D, E are located right next to both the bases, both teams shouldn't have any problem capturing them. However, point C is a bit in favor of the red team, hence the reason the blue teams often faces problems capturing it. If however the blue team manages to capture point C, it can have the entire red team's fate in its hand - so it is highly advisable to not let the blue team capture point C.

An excellent player for a Skyscrapers CP battle could equip turret of any range, depending on hull, which should be healthy and steady enough to stay around as longer as possible to keep the points in the color of his team. Ideally, people who are better suited going ahead to capture more points should wear a medium-long ranged turret along with a light-medium hull, examples of which are Railgun-Wasp, Ricochet-Hornet or Thunder-Viking. People who like defending points however, need to be medium-heavy hulls along with a deadly turret, such as Vulcan-Titan, Striker-Viking or Isida-Hunter.