Guide to playing in Skylark effectively 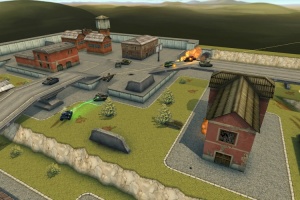 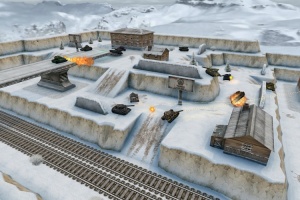 Overview: Skylark is a map almost impossible to look for. Very, very occasionally can you find it on a more unpopular server, but for the most part, you're going to have to make one and hope for the best. Battle Modes: DM, TDM, CTF, CP
Size: 24 players, 12 vs 12

Skylark is a map with ample cover, creating vantage points for Railgun users to utilise, and be untouchable, on the proviso they're accompanied by mines. There's a niche role for closer ranged turrets, such as Firebird since the bottom of the map is very narrow; however, if the action isn't toward the bottom, they can find battling troublesome. The ample cover makes Thunder an ideal turret to use, since it can capitalise on the many props. Ricochet is a less viable, but sound option for similar reasons. Striker can be a good option if you stay on the central bridge and keep locking-on to and destroying enemies from the vantage point there.

Light hulls have a role in being an offensive presence, but they cannot go unaccompanied, otherwise they will be butchered. There are ample ways of entering the base, some more exposed than others, but all of them likely manned, so care must be taken. A long range turret such as Railgun can be used to deal with those manning the entrances from afar, if they're not long range themselves, although it leaves you susceptible to death in the cramped quarters. Conversely, a short range turret can help you significantly up close, but makes it harder to reach the bases unscathed, meaning you'll have to be particularly stealthy; perhaps slower in your movements.

There are five control points in this map, and as such, some will be potentially be neglected, creating a niche role for light hulls in this format. It goes around claiming the abandoned points, which can situationally clutch a game. In the heart of the match, you're going to need bulk, such as Viking and Dictator; the populated control points will have many opponents looking to take it, and you need to have the HP for that. You do need a balance though; respawn points won't always be reliable; however, since the points are scattered, it won't always do you wrong, therefore, it's a risk you can potentially take.