Guide to playing in Silence effectively 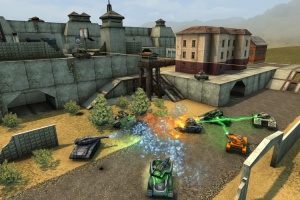 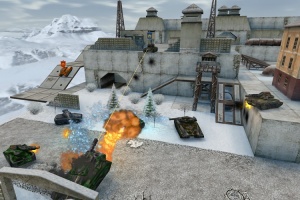 Overview - a map that's been with Tanki for a long time, and has undergone quite a few changes during its stay! Around a year ago, you couldn't escape the presence of this map, but has since suffered a deterioration in its popularity.

There are couple of ways you could go about defending in a map like Silence, most of which involve camping. A common strategy is to use Shaft, Magnum or Striker coupled with a heavy hull, aim at a route which enemies tend to use and pick them them off before they can react. The bulk is used to tank the hits once the enemies are aware you're shooting at that direction and wish to take you out before progressing. The laser of Shaft and Magnum often blow your cover but with experience you can learn to be sneaky. Magnum has an advantage as it can be quite difficult to trace and finish off. If playing on the Red team, hiding behind a wall and simply shooting above should make exceptional cover. If on Blue, hiding behind a house or crate in the base provides sufficient protection.


A separate tactic involves using Shaft but coupled with a lighter hull. You still hang back in defence, but the aim is, you stay at one point, snipe a couple of enemies, then move to another point, and do the same - this disables enemies from being able to predict your whereabouts and capitalize on it, and it also diversifies your gameplay with Shaft. The problem with this is that if you walk into an area where just about any enemy is, you're done - this is because you're generally not going to have enough time to get a full charge and snipe. If in that situation, hit as hard as you can before dying in order to make it easier on your teammates. This is also a strategy that can be adopted with medium hulls too, but you'll need to limit your movement, otherwise your offensive presence will be crippled.


Good points involve the bridge on the red side, and the cliff on the blue side.


Moving away from Shaft, equipping a turret such as Firebird or Freeze, in tandem with a bulky hull, and literally sitting on the flag works well. An Isida is beneficial as well, of course, but offensive enemies will have trouble scoring flags since they'll be slowed down, or put on a timer, if you drop. Just make sure a teammate of theirs isn't there to pick up the pieces. At the same time, this isn't something you want to be doing on your own, if that wasn't obvious enough; you don't want to be in a situation where there are 9 attackers and 1 defender, otherwise stalemate situations are inevitable. (although unless playing with friends, there's not much that can be done about this). Not only this, there are a couple of ways enemies can enter your base, which makes it difficult to guard effectively.

For offensive presence, Hammer is a solid choice. It hits like a truck, with a single clip. Such potency is what you'll need if you want to score flags, especially with the quality of defence achievable in this map. Twins is also another great option for this map; reload isn't a problem at all, which can be capitalized on, when it comes to taking the flag. However, getting too close can be an issue due to splash. In addition to this, Ricochet and Thunder are competent hard-hitters in combat, although you'll need to hang back a tad; self-destruction is a thing with both of these weapons, although way more frequent with the latter. Bulk is required as well - you're probably going to have to fight an enemy before you even reach the defence, so you'll need the HP to survive in such physical combat. Light hulls have little utility in battles like this; they'll get ploughed through before they can even reach the flag. It's easy to think otherwise as it's a big map - however, the bases aren't so big. The center of the map is where the large size lies. Although, it's possible that if you create a diversion, a light hull can run in and out, although the problem of encountering enemies outside of defence is still very much a thing, rendering it ineffective. Your best bet is with potency and bulk.


Combat in this map has been made out to be a true fight, due to the prominence of the usage of supplies, the varying methods of offence, and the effective methods of defence. Therefore, the following position is important.

Generally, this is not going to be a map where you can go at it on your own and have a decent chance of getting away, like it is in Sandbox, for example. The main turret used for support is Isida, as it's a regenerator of HP, which enable teammates to battle for longer. This particularly complements Twins, as it practically doesn't have a reload. Typical Isida supporters stay in reach of teammates but out the combat - for example, if you're on the red side, the Isida would stay on the incline, as opposed to the right of the teammate. Magnum can prove to also be a great support weapon when trying to make a quick getaway. It can easily take out swarms and unsuspecting chasers.

A good strategy for winning a Silence deathmatch is standing at a point where you can see most of the map and continuously fire from there - for example, the cliffs located in the blue base are decent points to shoot from. Alternatively, toward the bottom is a tower on a platform in which this strategy can work too - the tower is effective at covering light hulls completely. Be wary of enemies that sneak up behind you however. You'll want to be using turrets like Thunder, Railgun, Vulcan, Shaft or Smoky. The hull you use is contingent to the particular position you're using, and the turret you're using. For example, if you're at the tower in the red base, a lighter hull is more helpful, since the tower can absorb hits for days.


Otherwise, a lot of the turrets can prosper in this map; you just have to stick to the correct areas. For example, a shorter range turret like Twins will want to situate himself at the cramped quarters of the map, where the enemies won't have room to dodge and/or escape attacks, whilst a long range user will want to situate himself in a place where he can see most of the map, as this increases the amount of targets in his reach.

In general, bulk is almost a necessity if you want to prosper in CPs - Viking should be your minimum here, although speed isn't so much of a requirement, given the spawn points, and the distance needed to seize one control point.